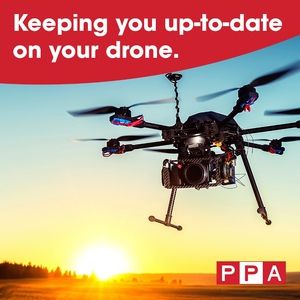 Mistakes in drone safety could result in destroyed equipment, injuries, fines, and possibly even jail time. The BBC reported on the case of Paul Skinner, the 38-year-old owner of an aerial photography business in Washington state. Skinner was recently found guilty in Seattle Municipal Court of reckless endangerment and handed a $500 fine, plus 30 days in jail, after an incident during Seattle's Pride Parade in 2015.

Skinner's drone flew into a building, then dropped onto a crowd of people below, knocking a woman unconscious and leaving her with a concussion, reports the Seattle Times. A man also suffered minor bruises.

This is believed to be the first time a drone pilot has been given a jail sentence. Read more of this story on the BBC's website and remember to keep public safely paramount when operating your drone!

To be sure you're following best drone practices, head to PPA.com/Drones and read up on all the rules, get registered, and learn about adding drone coverage to your PhotoCare and General Liability insurance... all designed to keep you informed, empowered, and protected!

Marketing Your Photography Business Doesn’t Have to Be Difficult. Read These Articles, Gain a New Insight, and Take Your Business Skills to the Next Level - ARE YOU STRUGGLING WITH YOUR PHOTOGRAPHY BUSINESS? PERHAPS YOU’RE TAKING THE WRONG APPROACH This DIY photography article will change the…

PPA members, What’s in Your Bag? Take a look at the Gear that These Members Always Have on Hand - We recently started a conversation with you in theLoop about the unique, can’t-work-without items in your gear bag. Over the years, the…