As drones have become an integral part to running a successful events photography business, you need somewhere to turn to keep you safe and

PPA has the resources available for you to take to the skies…and push your photography further.

Below you'll find resources to enhance your understanding of insurance options and waivers for your device, information and guidelines for flying, compensation and pricing, safety and etiquette, business applications, and more.

Want to set yourself apart from the rest of the pack?

Learn more about PPA's Drone Certification and get certified! Or find everything you need to know about and keep up with the ever-evolving FAA Drone Regulations.

Using Drones In Your Business

PPAedu has an extensive library filled with hundreds of educational videos on topics that may interest you. They are here to help you learn how to incorporate drones in your business. Aside from being interesting, these videos are packed with loads of information to help you brush up on, or learn more about photography.

What You Need to Know About Drone Registration and Licensing

There are few technologies today with more conflicting regulations and misinformation than that of the legal operation of small unmanned aircraft systems, more commonly referred to as drones. Let's start with the basics: aircraft registration, operator licensing, and insurance.

Add a DRONES Clause to Your Contracts!

PPA knows it's important to make sure our members are ready for anything. That's why we have done some of the work for you! Now, under the forms and contracts section, exclusively for PPA members, is a Drone Clause that you can add to your existing contract.

Click here to go straight to the FAA’s website and get first-hand information on how to register your drone, rules for flying, and how to become a drone pilot.

In this video, Randy and Stacy give a brief overview of the DJI drone hardware components as well as their DJI Go App. Take a quick tour of the DJI Go App and learn the internal functions of what goes into drone flight.

Buying Your Drone: What You Need to Know with Randy Braun & Stacy Garlington

Buying a drone? Watch the video and learn which features you should be looking for when buying your first drone from Randy Braun, director product experience with DJI, and Stacy Garlington, product specialist with DJI.

Find Your Flier: Best Drone for Photographers
You want a drone that has reliable photographic quality without a complex learning curve. This list includes what I believe are the safest, highest-quality drones that are ready to fly with a miniumum of training.

High and Mighty: DJI Phantom 4 Review
In March DJI introduced its Phantom 4 drone. In many ways, it's a modest upgrade to the Phantom 3; however, major improvements can be seen in some key areas.

Curious about what goes into flying a drone? Watch this episode as Stacy shows you a basic overview of flying a drone from the pre-flight checklist to take-off and landing. Get a quick glance at what a drone can do.

FAA to release Drone Facility Maps
The FAA will begin to release their first set of UAS facility maps. These maps, which will be released over the next twelve months, show drone operators which areas, and what altitudes a drone can be safely operated.

Drone Safety, Tips on Flying, & How to Get the Best Drone Photography on PPAedu!
While many people enjoy flying drones for personal use, when it comes to flying for commercial photography purposes, you've got to really dot your i's and cross your t's to make sure you start off (and stay) on the right foot.

Avoid "Close Calls" When Flying Your Drone
Section 107 Drones regulations have been out less than a year, and drone usage has skyrocketed. Currently, according to the FAA, there are approximately 7,200 registered drones. With such a large increase in drone usage, the number of close calls between drones and airplanes has also dramatically increased.

PPA is proud to offer both equipment and general liability insurance for drones to members who use drones as a part of their photography business. Both insurance plans are great on their own, but work even better together to protect you as a photographer. PhotoCare Plus covers loss and any damage to equipment, including drones. Adding the drone specific general liability plan on top of PhotoCare Plus extends your coverage to include bodily injury and property damage to others. Combining both plans ensures that you have all your bases covered just in case something goes wrong. Below you will find the details of the individual plans and how you can go about signing up.

Accidents Happen: Insure Your Drone
Thanks to new regulations enacted this fall, it's now easier than ever to add drone photography to your business. But beyond passing the FAA's aeronautical knowledge test and being vetted by the TSA, you'll also need something else: insurance.

How to Do Drone Photography
Aerial photographer Parker Gyokeres first started experimenting with drone photography as a public affairs photojournalist in the U.S. Air Force. On assignment to document various operations, Gyokeres often wanted to get more elevated perspectives, but he couldn't get high enough with a ladder or on a building.

What You Need to Know About Drone Registration and Licensing
There are few technologies today with more conflicting regulations and misinformation than that of the legal operation of small unmanned aircraft systems, more commonly referred to as drones. Let's start with the basics: aircraft registration, operator licensing, and insurance.

9 Drone Composition Tips
Drone imaging has given us a new way to obtain unique camera angles. Let's take a look at some of the details you'll need to consider when planning these compositions.

So you want to fly a drone? First learn the safety, rules and proper flying etiquette before you take flight. Randy and Stacy will discuss the basic safety procedures that go into flying a drone. This episode will also briefly explain the FAA flight rules and regulations.

10 Best Drone Practices
There it is: Your spanking new Remote Pilot certificate from the FAA. You can now fly a drone and get paid for it! The potential is huge because low-altitude aerial photography can immediately differentiate your business.

Drone Crash Leads to 30 Days in Jail
Mistakes in drone safety could result in destroyed equipment, injuries, fines, and possibly even jail time.

Drone Safety, Tips on Flying, & How to Get the Best Drone Photography on PPAedu!
While many people enjoy flying drones for personal use, when it comes to flying for commercial photography purposes, you've got to really dot your i's and cross your t's to make sure you start off (and stay) on the right foot.

Washington D.C. is always a NO-DRONE ZONE
No matter what time of the year it is, you cannot fly a drone in the D.C. airspace.

9 Drone Composition Tips
Drone imaging has given us a new way to obtain unique camera angles. Let's take a look at some of the details you'll need to consider when planning these compositions.

Have Drone Questions? Get Solid Answers from a PPA Pro!
In the past four months, all everybody seems to be talking about are Drones. Between trying to figure out the new FAA regulations, deciding what type of drone to get, studying for the FAA certification test, and making sure you are properly insured; it can make anybody's head spin.

Waivers for Your Drone 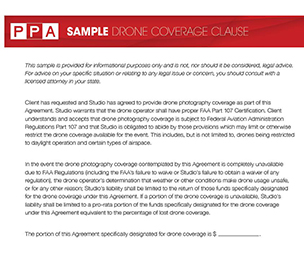 This sample drone contract rider can be inserted into your event photography agreement.

How to Apply for Section 107 Waivers
Many members have asked PPA about Section 107 Drone Waivers and how they can apply for them. Well, have no fear; PPA is here to give you tips to ensure your waiver will be granted.

Practice Part 107 Knowledge Test
Breaks the test down step by step and also puts extra emphasis on areas that many members found difficult.

What YOU Need to Know About Drone Waivers! Part One...
It's been a year since the introduction of the Section 107 drone regulations and many photographers are still extremely excited! As more and more photographers look to incorporate drones into their businesses, the FAA is attempting to stay on top of the influx of waivers that are coming in.

What YOU Need to Know About Drone Waivers! Part Two...
As a part of our drone waiver series, we will continue to talk about the 9 waivers drone photographers can apply for under the section 107 regulations.

What YOU Need to Know About Drone Waivers! Part 3
As a continuation of our Drone-Waiver series, today we're going over how to obtain a section 107.31: Visual Line-of-Sight wavier.

Five regional districts all competed this week in nationwide judging of images at PPA headquarters.

You can't appeal to a target audience if you don't know who you're targeting. While you may have a general idea of whom your customer is, it is imperative that you really understand what drives him or her. Once you know who you're talking to, then you will know how…

Come Be A Part of the PPA Family

Learning everything that a PPA membership has to offer can be overwhelming, so we’re here to break it down for you! If you have any questions about what the PPA membership holds for you make sure to check out the upcoming webinar, PPA: What’s In It For You?

President’s message: A busy and wonderful time - © Gregory Daniel Portraits and Kyla Renee Paintings The holidays are my busiest time of year both in the studio and personally. Somehow, I…

How to focus on what really matters - We live in an amazing time. There is so much information at our fingertips, all the time. Photographers have access to a seemingly endless…