Ben Shirk, M.Photog.M.Artist.Cr., is the Grand Imaging Award winner of 2018.

Since 2011, Shirk has received 13 Grand Imaging Awards from PPA, taking honors in the portrait, wedding, and illustrative categories. This year, his “Till Death Do Us Part” image (above) took the overall top prize. The award was announced Jan. 15 at Imaging USA in Nashville, Tennessee.

A proponent of PPA’s annual International Photographic Competition, Shirk says the work he puts into prepping his IPC entries increases his overall skills: “And hopefully it reflects on future clients’ images … taking it to the next level instead of just doing what you’ve always been doing.”

Shirk has spent years developing and honing his recognizable style. Today he runs a successful photo business in a 3,300-square-foot studio in Wilton, Iowa. He’s been featured on ESPN, NBC News, and in USA Today as an authority on high school athletic portraits.

“I definitely gear a lot of what I do toward athletes,” Shirk says, “and I think others are realizing there’s potential in photographing athletes. ... The digital side is definitely helping photographers realize the sky’s the limit.”

Shirk sells templates on his website and teaches techniques to other photographers, which have increased his business profitability and expanded his influence. “Lots of people were asking to be able to do the same things I was doing, so [teaching others is] something I was led to by people inquiring about it.”

And to those photographers looking for his tips on profitability, Shirk advises perfecting your art and focusing on high-end work: “There will always be clients that are looking for something better than the average.” 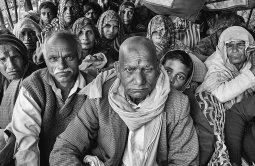 The World Photographic Cup was founded in 2013 and pits teams of photographers from various nations against one another in friendly competition.