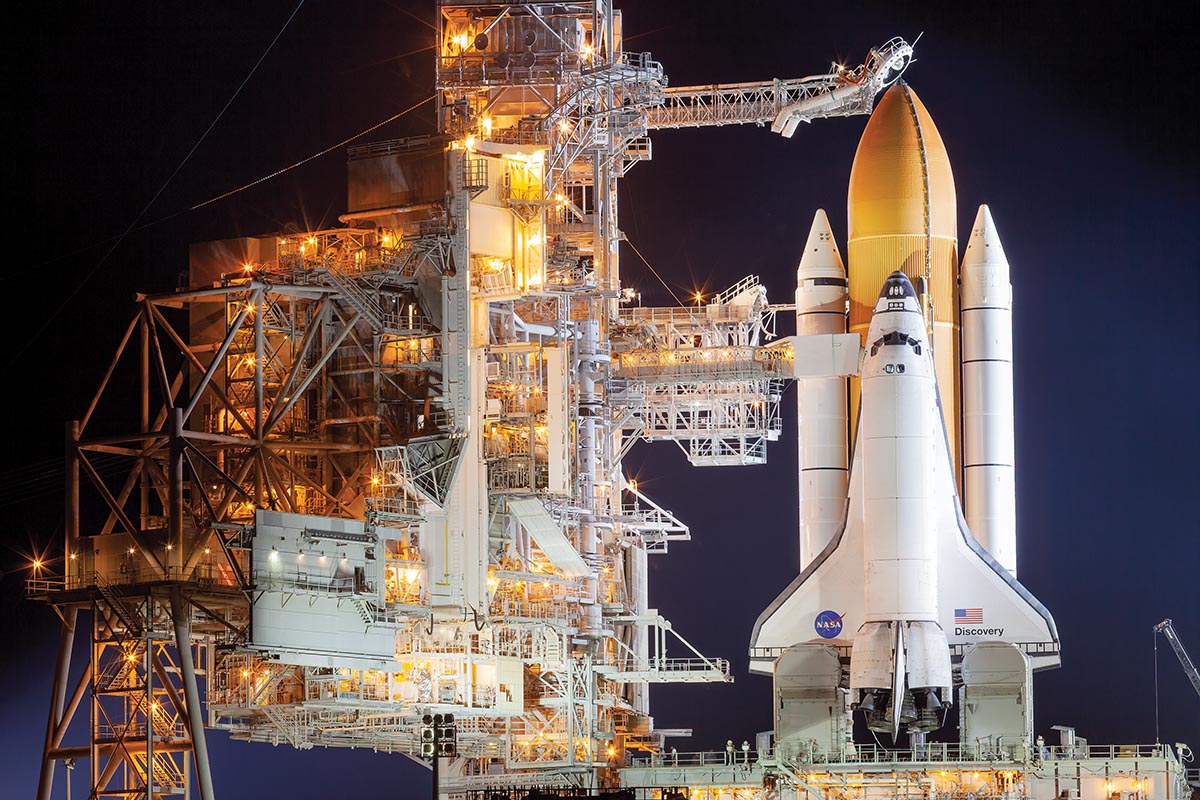 In 1999, Roland Miller was away at a conference when Cady Coleman called his office at Florida’s then Brevard Community College. Miller was teaching photography at the college; Coleman was training at the Kennedy Space Center for her second flight on the Space Shuttle Columbia. Miller’s photographs of abandoned space launch sites adorned the astronaut crew quarters where Coleman was staying, images that packed as much emotional resonance as historical relevance. Coleman, whose husband, Josh Simpson, is a glass artist, called Miller to say how much she appreciated his work.

“This was the first time—and I’m figuring the only time—an astronaut would ever call me, and I missed the call,” Miller says. He called back to the center, but Coleman had already returned to Houston. It would be 14 years before they connected, when he was photographing the 2014 initial test launch of the uncrewed Orion capsule and she was serving as a NASA spokesperson to the press. She not only remembered Miller’s work when he approached her, she had an idea for him. Having spent six months on the International Space Station in 2010, she said, “I wish there was a way we could get your photographic vision to the astronauts up on the Station. Think about how you do that.”

“When an astronaut tells you something, I’m going to try it,” Miller says. The result is Miller’s 2020 book with Italian astronaut Paolo Nespoli, “Interior Space: A Visual Exploration of the International Space Station,” Miller’s third NASA-related project. In addition to documenting eras of space flight, Miller has indulged in a career-long photographic fascination with another frontier, juxtaposing American West iconography with the reality of the region. His approach to photographing both frontiers leads to his identification as a documentary and fine art photographer. 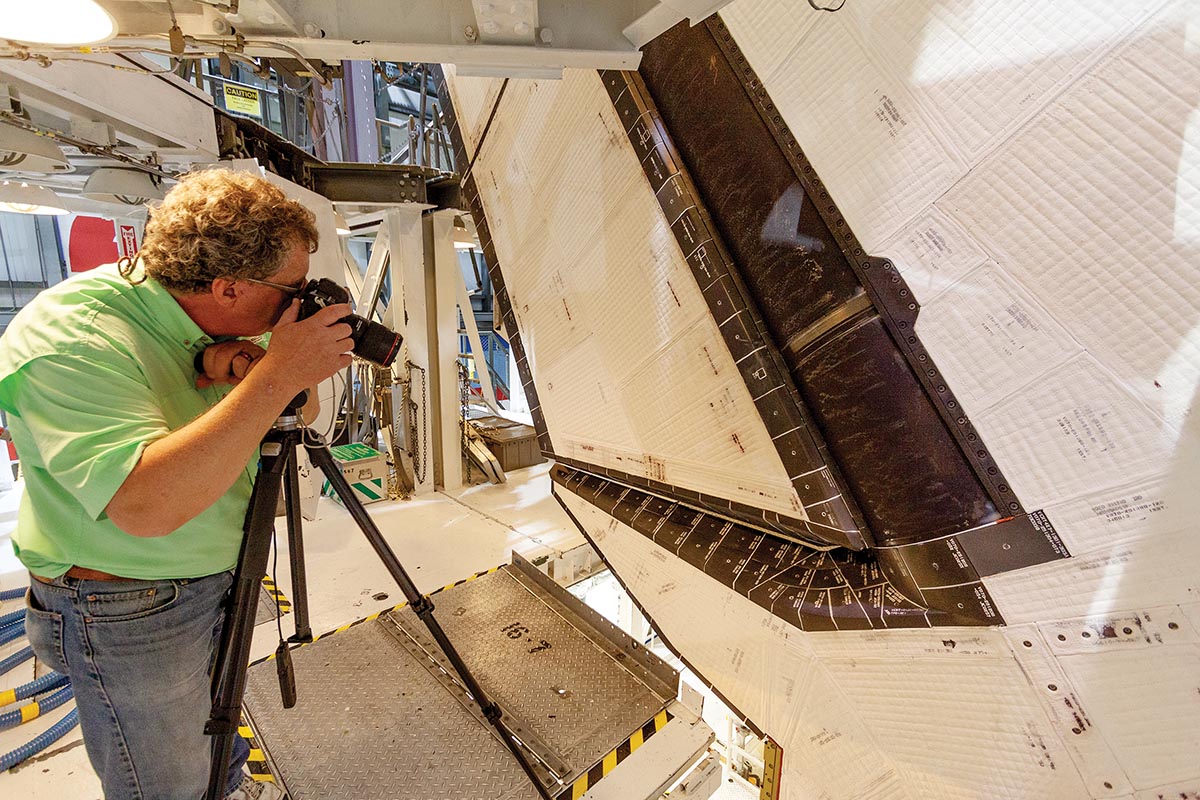 “My photography is a weird hybrid of documentary and abstract imagery,” he says. When he started marketing his first project, “Abandoned in Place” with images of disused launch facilities, he was advised to do either documentary or abstract style images. “But I felt I needed to do both, so I persevered and pushed through.” His instincts proved right: Contextual images had the recognition value to draw audiences into the more intriguing abstract images. Miller discovered the value of a dual documentary/abstract aesthetic when he assigned his students to photograph the same subject from both a concrete and abstract point of view. “I did it on a whim, and it really clicked with the students.”

With bachelor’s and master’s degrees in fine arts from Utah State University, Miller built his photography career through 32 years teaching at Brevard Community College (now called Eastern Florida State College) and the College of Lake County, Illinois, where he became dean of the communication arts, humanities, and fine arts division. He taught everything from photography history to techniques, but since retiring from academia in 2018, he most misses teaching basic photography. “The learning curve is the best,” he says. “Students get it, and they just accelerate.” Plus, teaching the basics for two semesters year after year helped his own photography.

“I need to remind myself of that more,” he says in a Zoom call from his home in Ogden, Utah. “Don’t get so involved in trying to make great photographs. Think about the basics: light, color, composition. The basic stuff is what gets you to the better stuff, and if you try to leapfrog, that’s when you struggle.” He also believes in constant practice with no end use in mind for the images. “I look at photography as being a concert pianist: You practice for hours and hours and hours for every hour you perform on stage.” 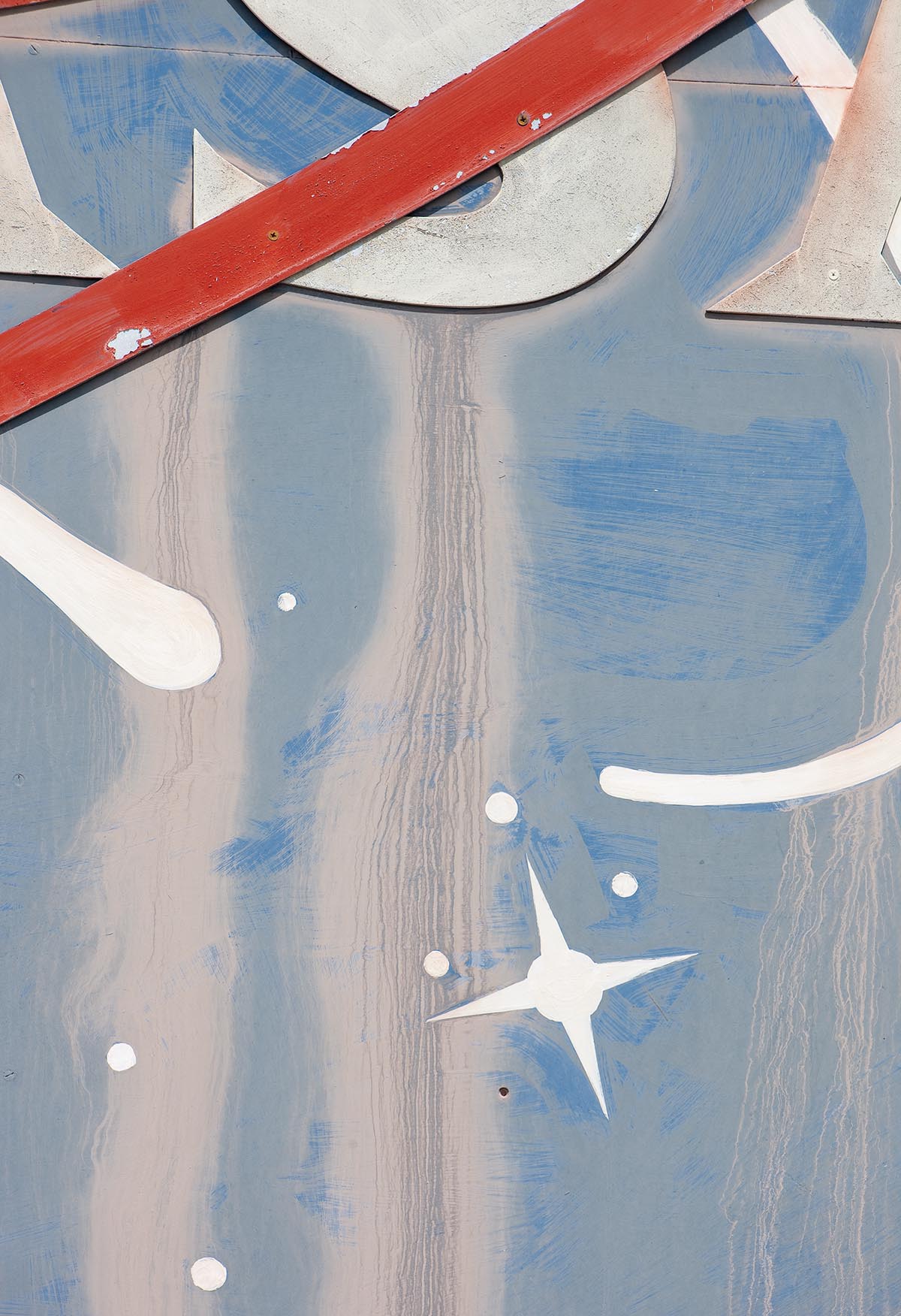 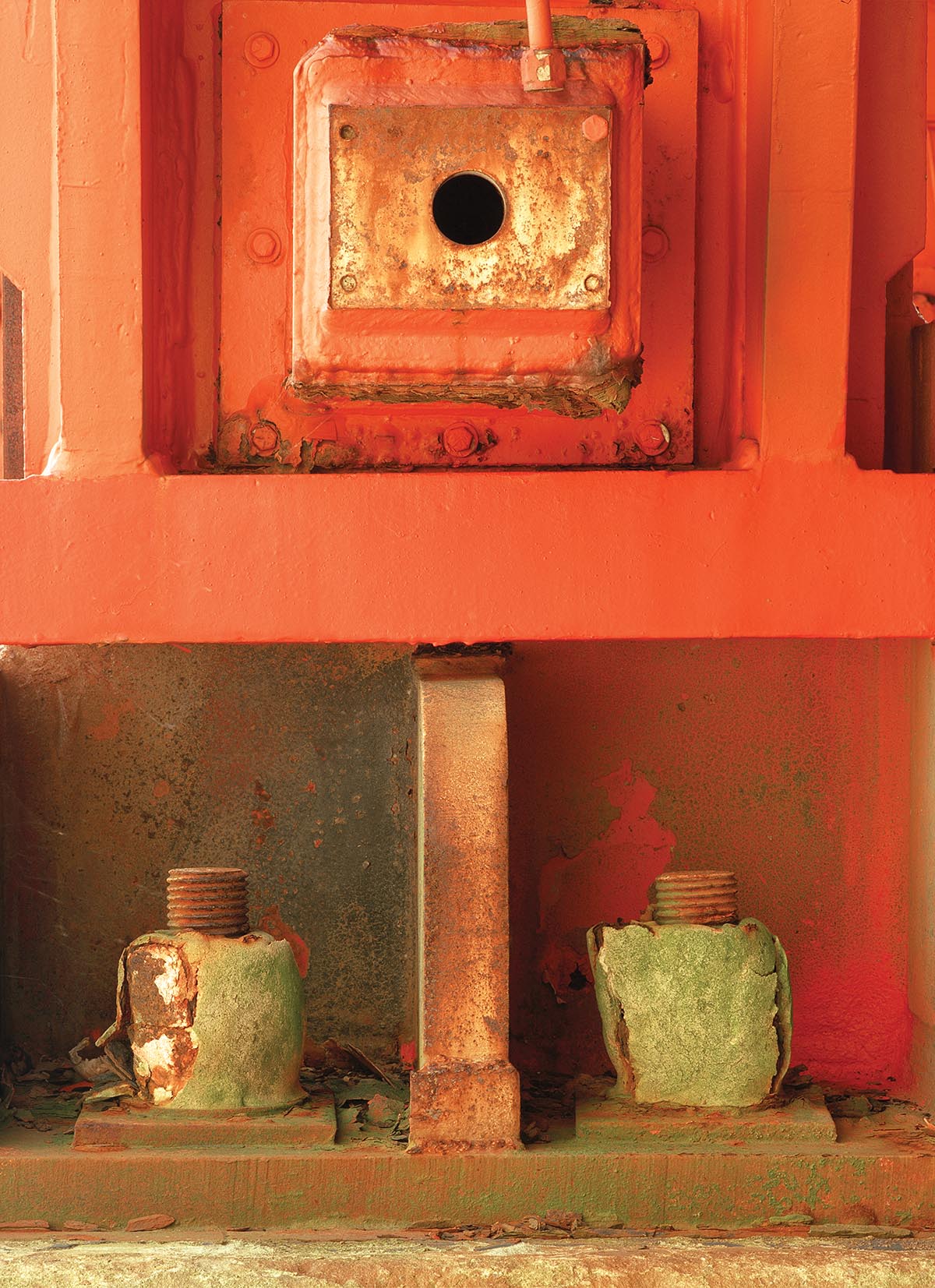 He first connected with NASA when Cape Canaveral Air Force Station called him while he was teaching at Brevard. A previously unknown darkroom had been discovered during renovation of an old office building. Miller had extensive darkroom experience and was asked to help identify and dispose of the chemicals. Miller also had a childhood love of all things NASA, so he quickly accepted an invitation to see some of the old launch pads. At Gemini’s famous Launch Complex 19, Miller saw the hinged gantry still lying on the ground after Gemini XII’s liftoff concluded the program in 1966. “I got out of the car and said, “This is so cool. I’ve got to photograph this.’”

Miller’s subsequent path to his first book, “Abandoned in Place,” hit snags. It was difficult to gain access to classified areas, and his 8x10 view camera required more time than escort availability allowed. A haircut made the difference: His barber was dating a woman working in NASA’s public affairs office. The barber set up a meeting. “She got it,” Miller says of the public affairs employee. After she took him to the old launch pads a couple of times, Miller showed the results to Chuck Hollinshead, chief of NASA’s Public Information Office and the narrator for Apollo missions. “And he got it,” Miller says. This opened access to Cape Canaveral and other NASA and U.S. Air Force space facilities around the country.

“Through all of this, perseverance is so critical,” Miller says. “My mother would always lovingly say to me [that] I have more luck than sense, which has been the case, but that comes with a big dollop of perseverance and being able to perform when you get the opportunity.”

With the success of “Abandoned in Place,” Miller began chronicling the Space Shuttle program, which was then scheduled to end in four years. “Orbital Planes: A Personal Vision of the Space Shuttle,” published in June, again combines documentary and abstract qualities but conceptually flipped. “I can comprehend what this little piece is and what it does, but when I look at the whole machine, it blows my mind.” 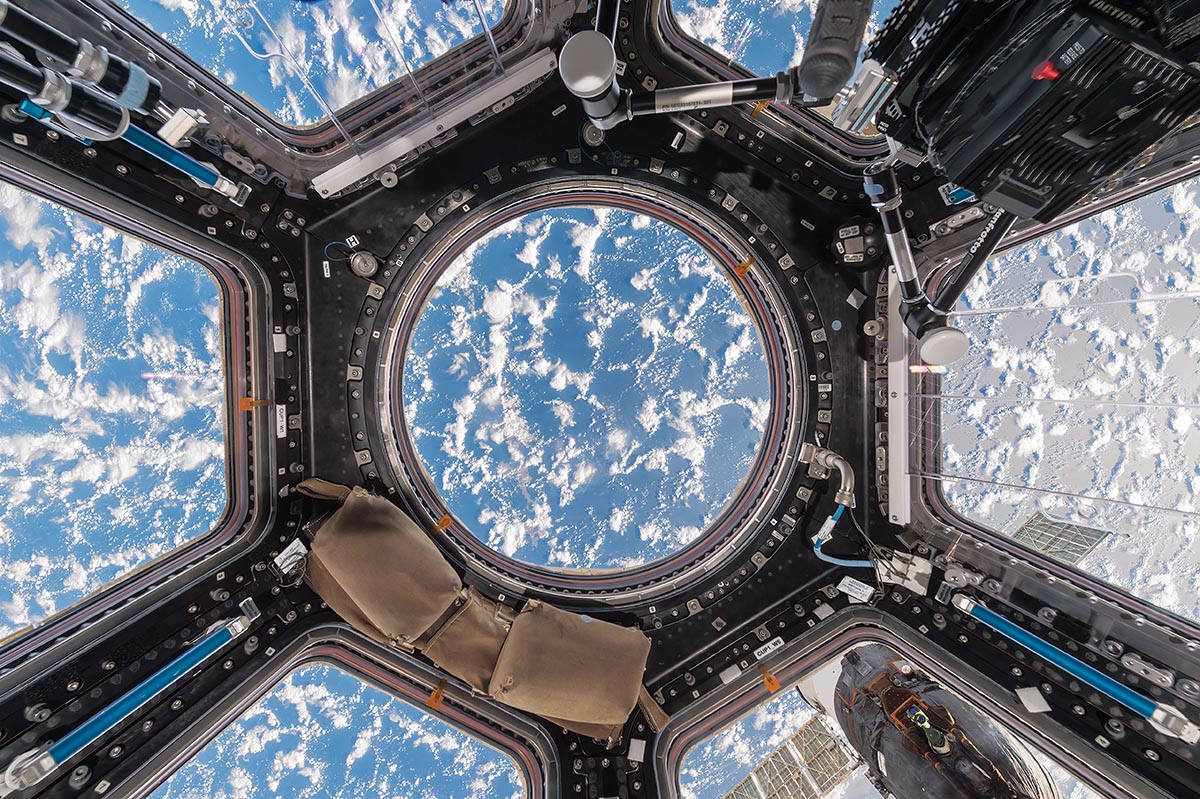 ©Paolo Nespoli and Roland Miller Courtesy of NASA and ASI

Juxtaposing details with the whole machine in the larger context of space flight is what Coleman envisioned Miller could do with the Space Station. Previous images were views of the earth or closeups of what the crew were doing. Most of that photography used flash, lighting the people but leaving the background dark. Miller wanted to document the station’s full interior.

But how to do it? He certainly wasn’t going to be launched to the station anytime soon. He devised an elaborate method of working through Mission Control to rig a proxy camera, but “astronaut time is crazy busy,” he says. While Coleman was on the Space Station, she played flute duets with rock musician Ian Anderson. She encouraged Miller to connect with an astronaut for a similar collaboration. She suggested Nespoli, a former photographer with the Italian Army who had been on the station with Coleman and was scheduled for a return.

“Paulo called me—second astronaut to ever call me—and said, ‘Do you have time to Skype this afternoon?’ And I said, ‘I will clear my schedule.’” They talked for 45 minutes, and “He got what the project was about.” In fact, Nespoli expressed a desire to have artists, poets, theologians, and philosophers taken into space to share the experience to the rest of mankind “in a proper way.” The astronaut believed Miller’s proposal was a step in that direction and offered to do the photography in his spare time and work with Miller via email. 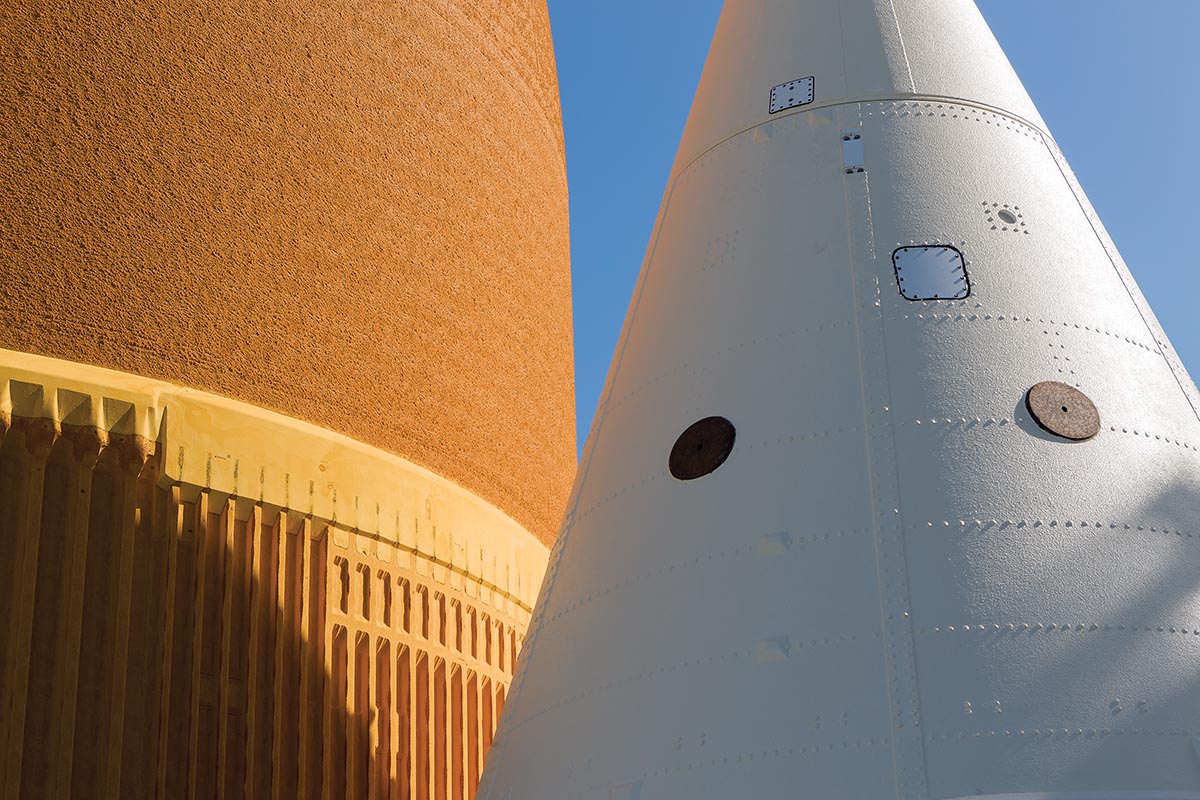 Miller was provided early access to a Google Street View of the Space Station that NASA was about to release. He used the virtual tour and screen capture to select his desired images and sent them to Nespoli with visual instructions on camera placement, cropping, and eyeline. “He did it amazingly close to what I wanted him to do, so much so that when I look at those photographs, to me they really do feel like I was there taking the pictures,” Miller says. Yet he’s quick to give Nespoli his due. “The method I wanted to use for this could not have been more difficult for him.” Miller allowed no flash except for balancing the interior with views out the window. However, he also knew Nespoli couldn’t use a tripod because it would float away, and the Station moves so fast it vibrates. Miller normally shoots at 100 ISO, but his initial proposal was for Nespoli to shoot at 3200 ISO to get enough depth of filed. The astronaut instead figured out how to cobble two articulated Manfrotto arms to attach the camera to the station’s handrails for maximum stability. He’d set the self-timer and get out of the image’s scope as fast as possible. “Technically and aesthetically, he did a really good job interpreting my instructions.” 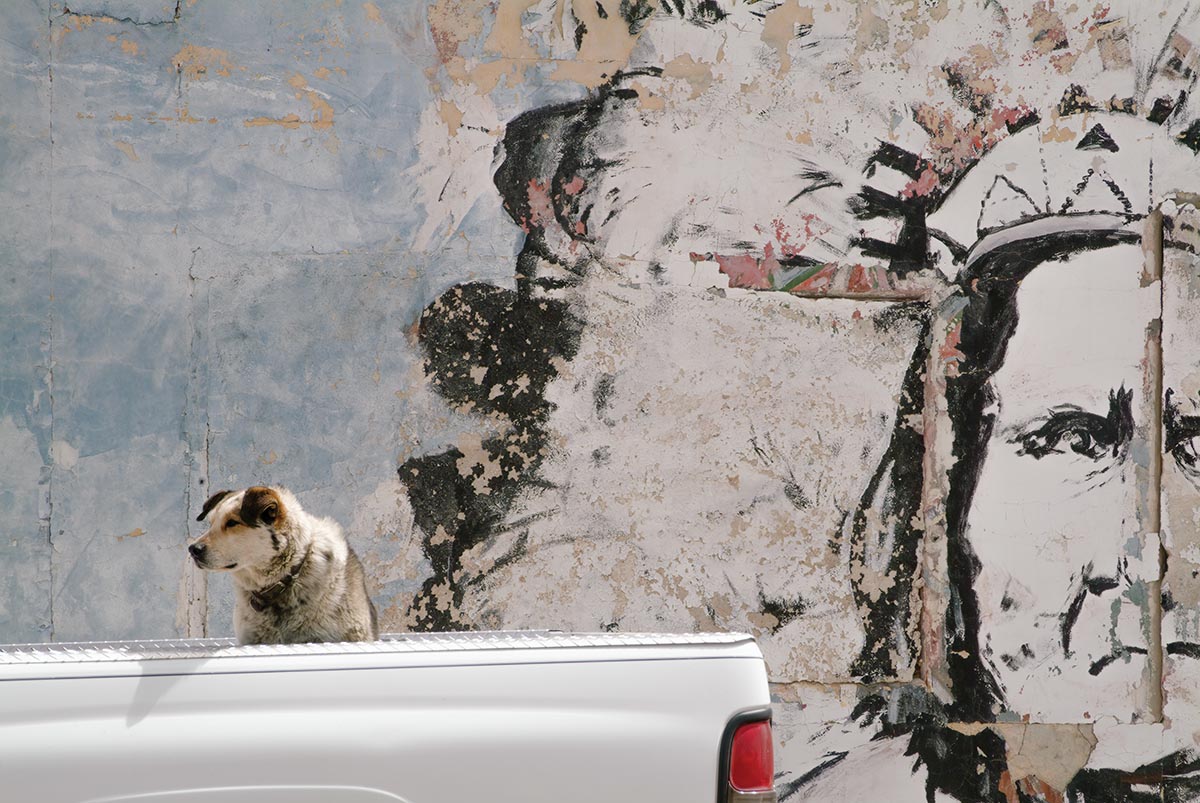 Since moving back to Utah, Miller resumed his Western iconography project, “Real West,” that emerged from one of his practice, practice, practice cycles years ago. The images juxtapose manifestations of Old West mythology—cowboys, American Indians, horses, buffalo, wood board towns, prairie schooners—with contemporary trappings of the West.

“There’s an overly romanticized view of what the West was like when it was the Old West and what the West is like even today,” he says. What started as a cultural commentary has blossomed to include contemporary issues of water usage, sources of power, and the environment. “Through the images I’m making, I’ve found a way to pull those things into the visual discussion of where the American West is at right now.”

He’s not looking for drugstore Indians or cowboy signs but images like costumed cowboys entering a Bank of America in Tombstone, Arizona, or a dog in the back of a pickup truck ignoring a faded and chipped wall mural of a Native American chief in a feathered headdress. “It’s easy to find Western themed things, but having them actually say something and mean something and point something out, that’s where the challenge is. You’ve got to find the right juxtaposition.”