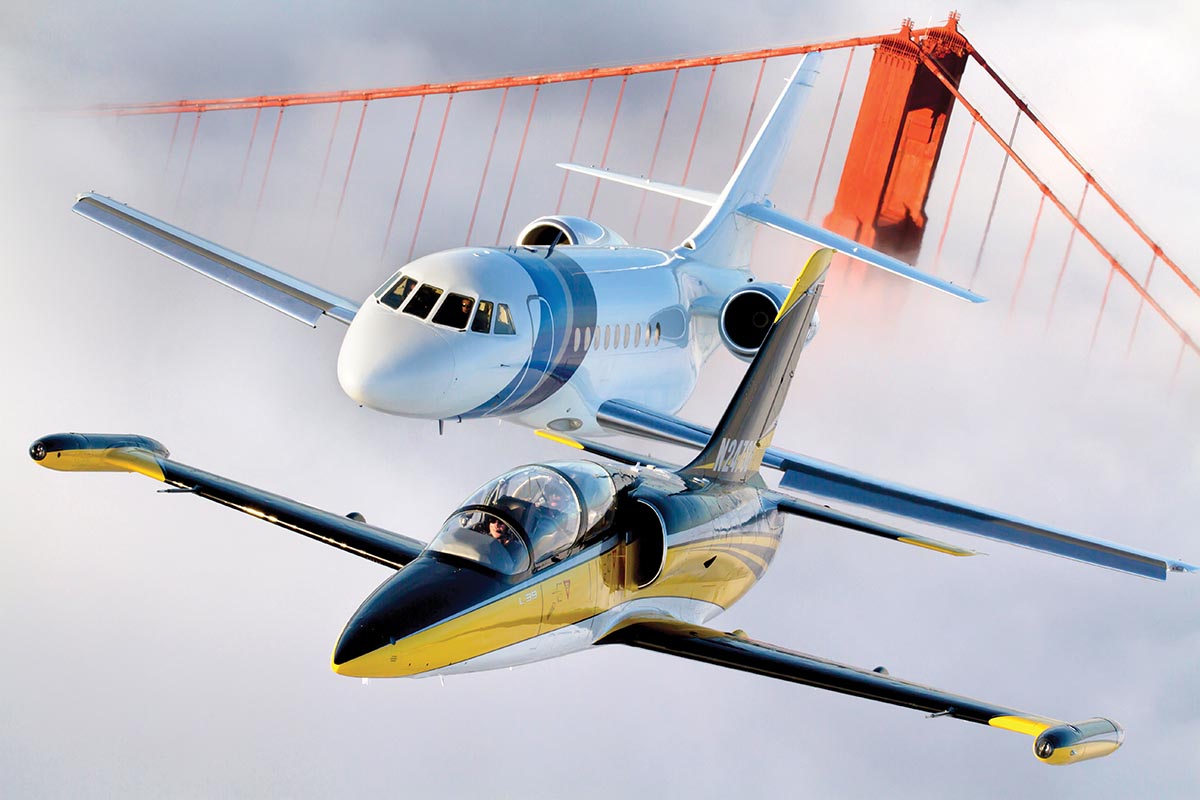 Few photographers have a portrait session checklist like Jessica Ambats has. Canon EOS 5D Mark II with 24-105mm lens, check. Canon EOS-1D X with 70-200mm lens, check. Batteries and memory cards with maximum capacity, check. Both cameras strapped around her neck, check. Camera bag tethered, check. Harness attached, check. Seatbelt latched and its buckle wrapped in masking tape, check. Life vest if warranted, check. Only then does Ambats thumbs-up her session: flying in the back of an airplane with no door between her and Earth.

Her portrait subjects are aircraft flying in close proximity to her own. Her backdrops are monumental mountains, rippling seas, shifting sands, skyscraping cities, bridges shrouded in fog, blue skies with wispy clouds. Her lighting is the dawning or dusking sun that she adjusts by varying the bank angles of the aircraft flying a racetrack flight pattern. She poses her subjects via radioed instructions and hand signals—they are that close and made to seem even closer through perspective shift. “It may look like they are flying inches from each other, but it’s definitely feet,” Ambats says. 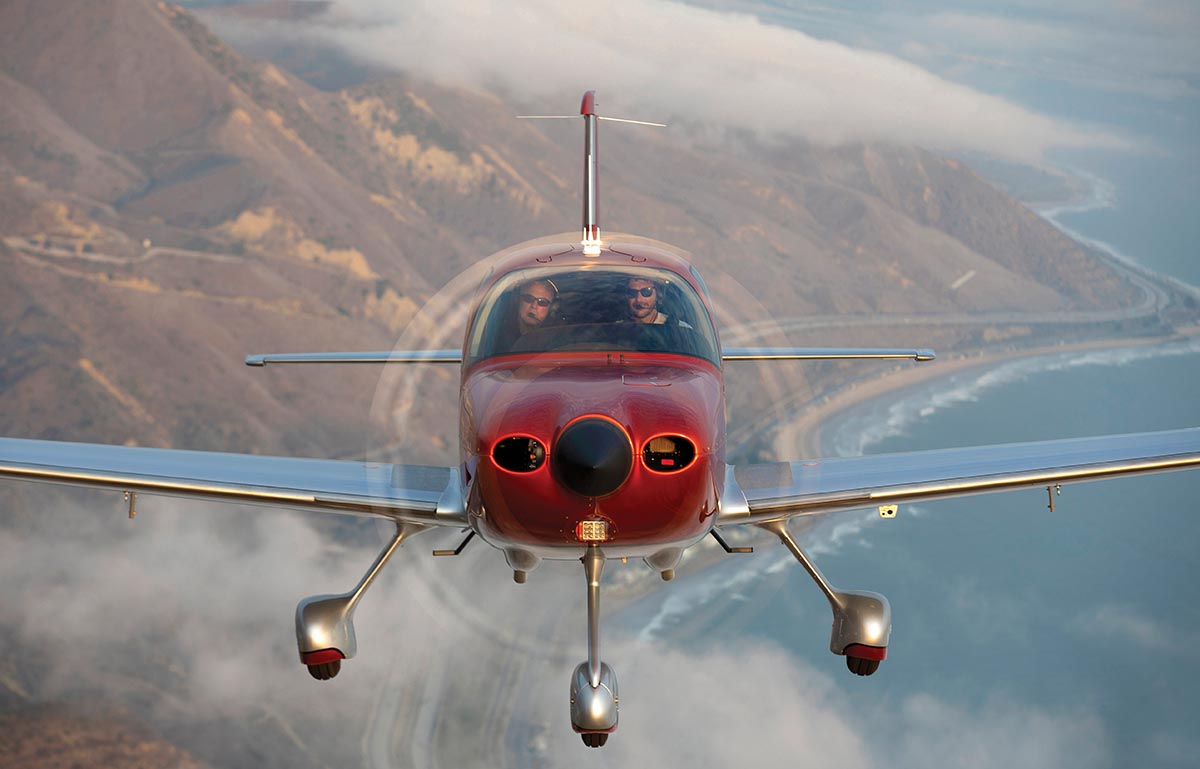 How many feet is a matter of working with some of the world’s most skillful pilots. “If I say move two feet, they will make a precise adjustment,” she says. That’s how she framed an aerobatic plane banking within the St. Louis Gateway Arch so wingtip-to-wingtip perfect it could be a logo. Pairing pilots’ flying skills with her own preparation, concentration, and experience as a pilot is how Ambats captured a red biplane and purple sports plane flying so synchronously that a professor accused her of blatant Photoshopping. “I wish I were that good with Photoshop,” she says. Not that she needs to be when she has at her disposal “two extremely good air show pilots who know positioning well,” plus her own experience knowing where to position them and how to compress the scene with her lens. 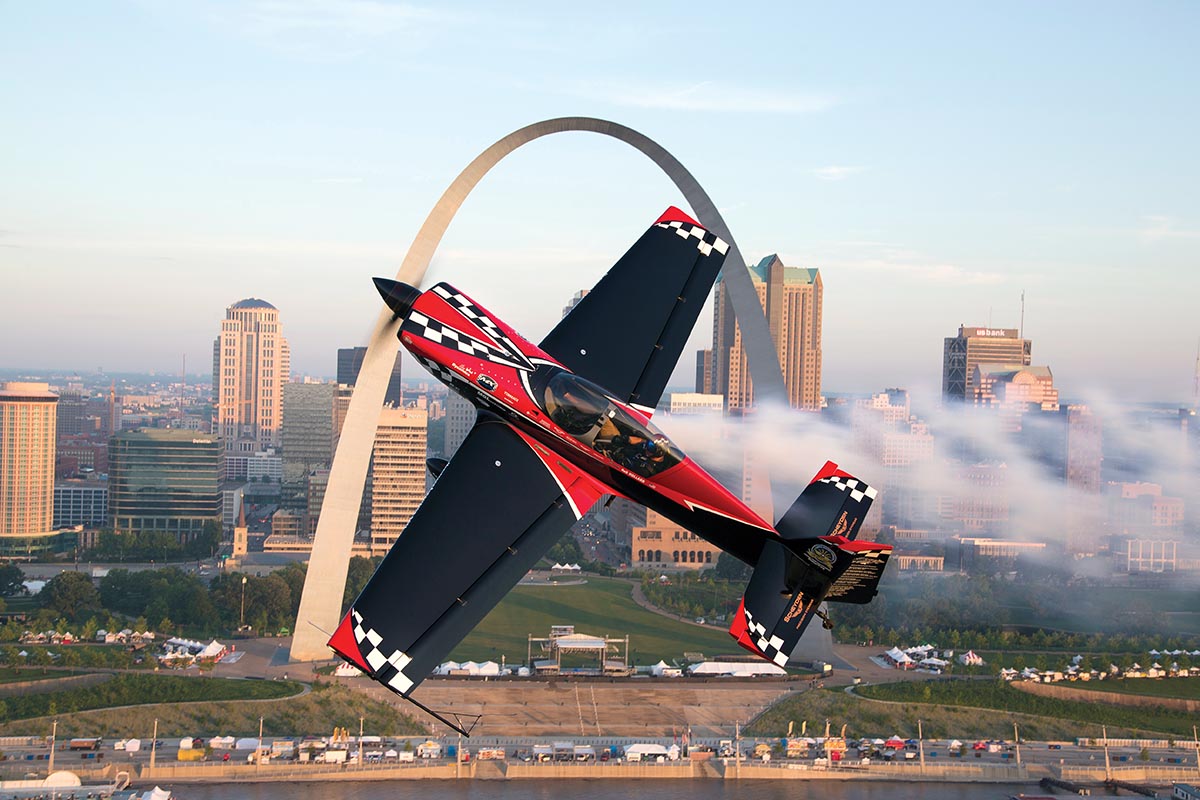 Ambats calls her air-to-air photography business a niche of a niche. She does commercial photography for aircraft manufacturers, but the bulk of her clients are “high-net-worth individuals who have a passion for flying, own their own planes, and want their picture taken in them,” she says. Clients get a set of images—their aircraft alone in the sky, against the landscape, silhouetted in the sun, and banking—and the experience of flying in tight formation. They share that experience and photos among the tightknit general aviation community. Word-of-mouth referrals and repeat clients keep Ambats busy.

For the sessions, the owner doesn’t pilot their aircraft; they sit in the command pilot’s left seat, while an experienced formation pilot flies the plane from the right seat. “Their job is to keep me alive, not hit us,” Ambats says. She draws from a network of a half-dozen pilots based in different parts of the country who provide and pilot her photoship. “Very few pilots I trust to do that.” She turns down any client who will not comply with her standards. 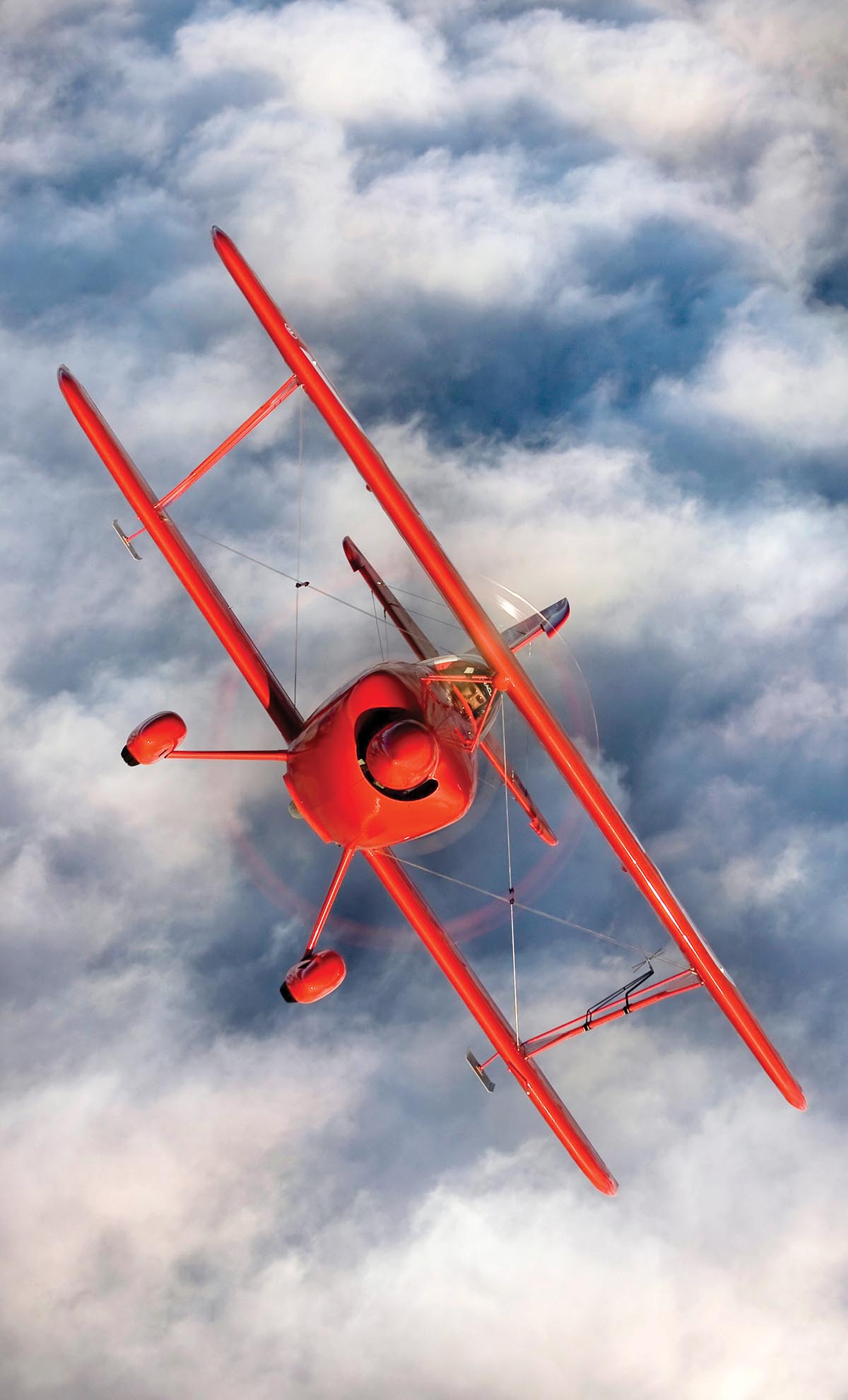 Her No. 1 goal for every photo session is returning home: “The photos become a bonus,” she says. She didn’t always think that way. “At the beginning of my career I would jump into any plane with any pilot.” As her career advanced and she became a mother, her regard for safety has escalated. She takes to heart an adage repeated at airshows: “There are old pilots and there are bold pilots, but no old bold pilots.”

Emphasizing safety results in better images, too. “This is a big team effort,” Ambats says. “If I have someone up there who doesn’t know what they’re doing, that’s a safety hazard, and I struggle to get good photos. The quality of photos improves when I handpick my pilots.” The owners, meanwhile, concentrate on posing. She advises them to wear light clothing to make them more visible and sunglasses because close-up shots require flying into sunlight. During the session, they follow Ambats’ instructions on positioning themselves as the formation pilot positions their aircraft. Such details matter so much to Ambats that the last item on her subject plane’s checklist is to remove that checklist from view so it’s not in the image. “Things bother me like, over a lake and rock formation that curves just so, I want to fit the airplane in over the lake but not overlapping the rock,” she says. 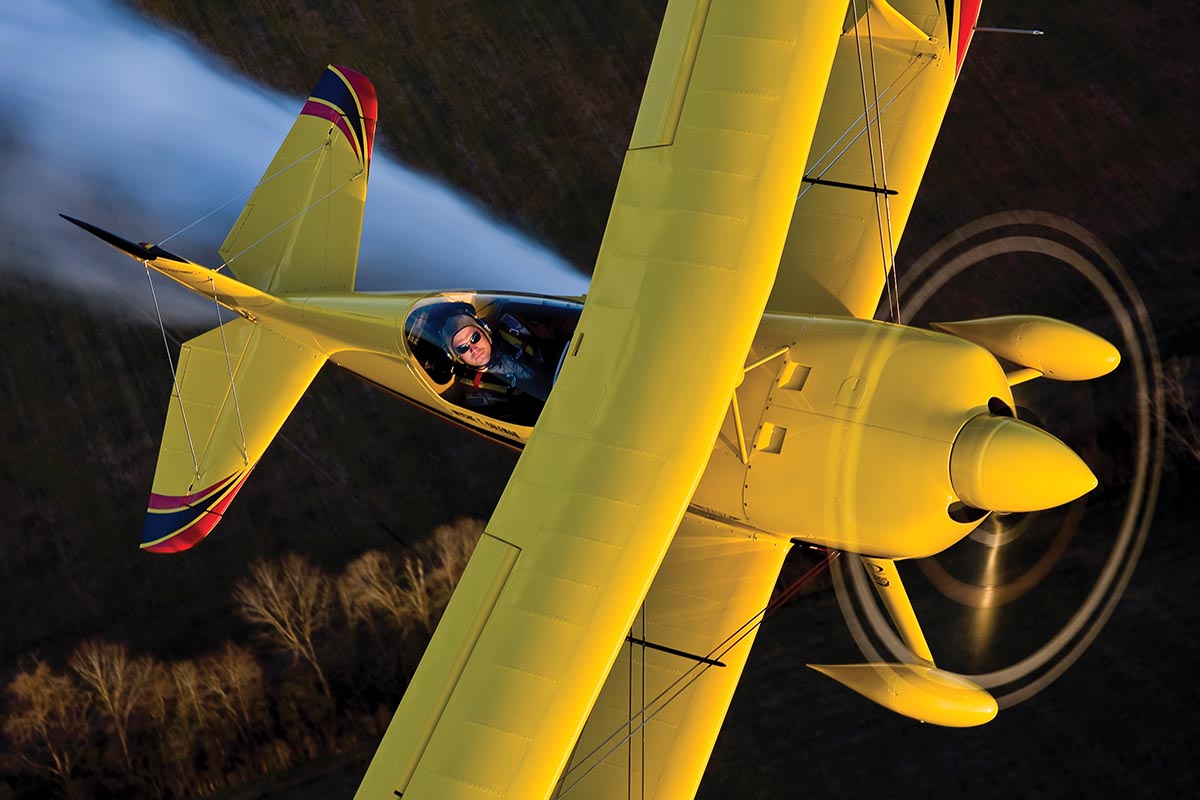 Ambats has more than 1,000 pilot-in-command hours. Her love of flight began as a child growing up in New York City, but she didn’t learn of general aviation until after college. “I didn’t know about these little airports that were accessible to small aircraft and somebody like me could learn how to fly and visit those airports”—let alone fly among the mountains in the Alps, Andes, and Alaska, and with the U.S. Navy’s Blue Angels. Her beginnings in photography, using a 12-shot disc camera, predate her interest in aviation. “I’d tell friends I like airplanes and I like photography, and they’d say why not just go to the airport and shoot pictures?”

Discovering air-to-air photography was her game changer. Attending a meeting of the International Society of Aviation Photographers in Dayton, Ohio, she met the publisher of Pilot Getaways magazine, became the managing editor, and moved to Los Angeles, where she’s still based. Ambats later became editor of Plane & Pilot magazine. Upon the birth of her daughter seven years ago, she started her own business, building it on her aviation photojournalism reputation and the contacts she’d already made. 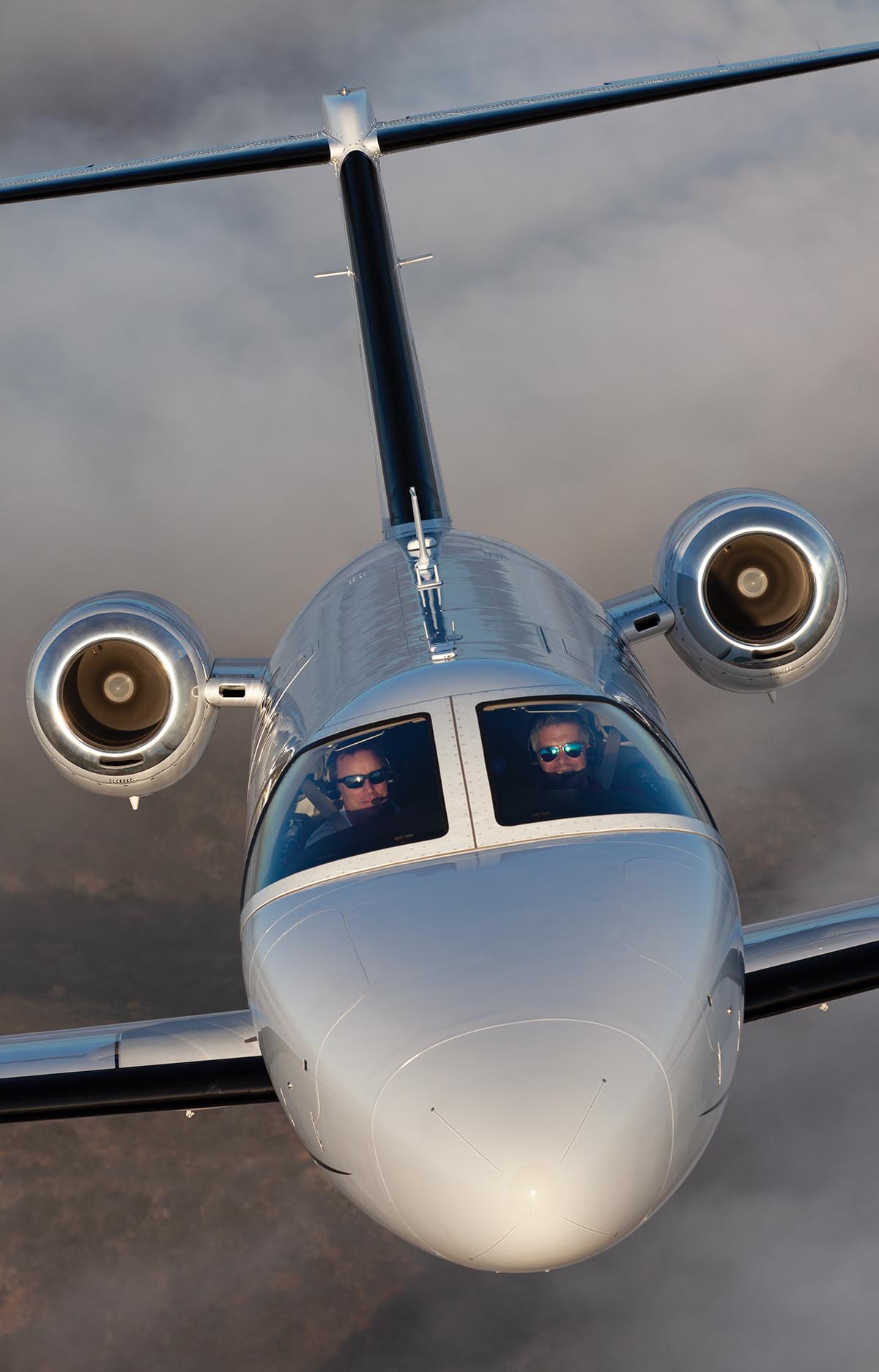 Asked about the source of the aesthetic quality of her images, Ambats credits only her experience. “It’s pretty much second nature to me from doing hundreds of shoots,” she says. “But there’s a learning curve, for sure.” She’s downplaying her intellectual acuity, having been a child prodigy in chess and finalist for the under-14 world championship in 1987. She describes the common factors of chess and air-to-air photography this way: “You’re constantly moving, and I’m thinking of what’s coming next. I’m thinking of the next shot as I’m taking a shot.” One big difference, though. “Chess is not a life-or-death situation,” she says.

That’s where her pilot training converges with her photography skills. “Part of pilot training is you learn to compartmentalize everything. If you’ve had a bad day, when you step into a cockpit, you have to leave that bad day on the ground.” Piloting also requires being meticulous, check listing every detail of the machine, the flight plan, the flying conditions. Ambats extends this same preparation to her photoshoots. She has several favorite go-to landscapes, but for an unfamiliar location, “I Google aerial photos and go on Instagram and look at hashtags for that background.” Even photos taken on the ground clue her into potential backdrops and challenges. Preflight briefings include her specific plans for positioning the aircraft. She uses a light tracker app on her cell phone to study light angles. “I can only shoot from one side of the plane, so we plan around that.” On the flightline, she takes time alone to plot the entire photoshoot in her head and then begins her pre-shoot checklist. 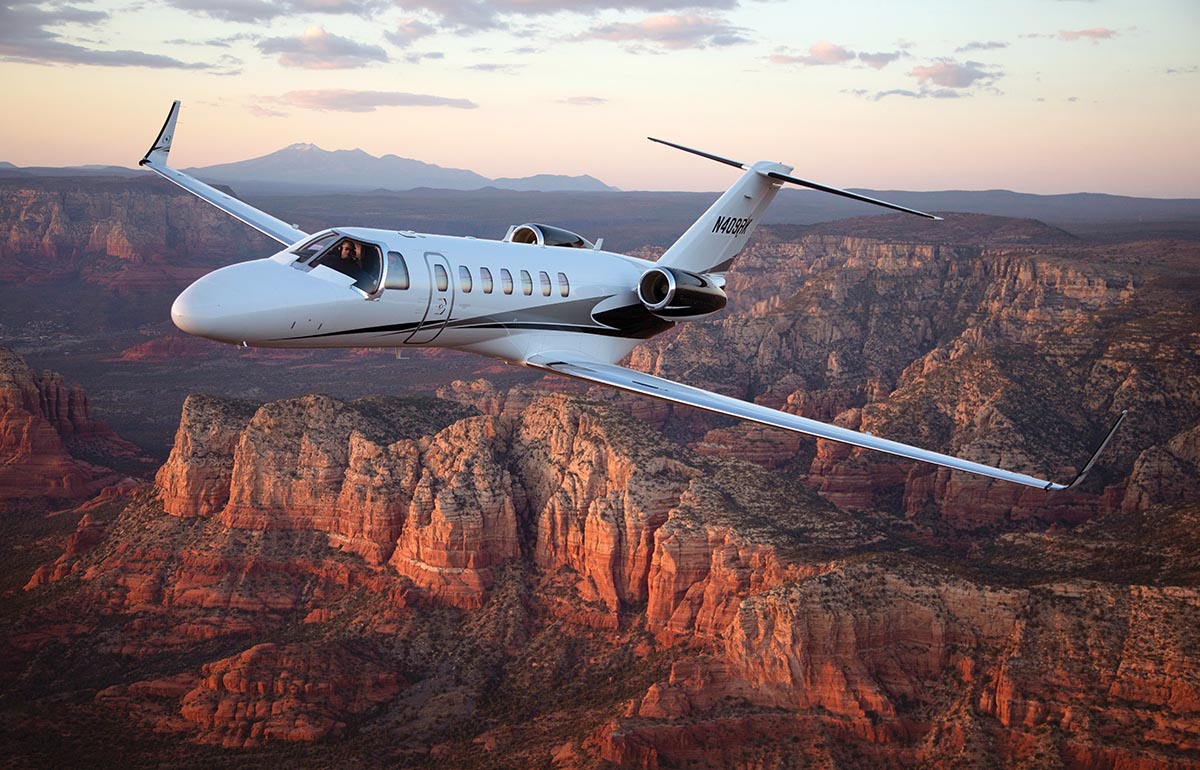 SKILLS TO THE TEST

The challenging environment has helped her hone her camera skills. Flights can be turbulent—the aircraft vibrating, the air cold, the wind blowing into her face. Yet, she uses shutter speeds between 1/125 and 1/60 to capture the blur of the propeller. “I’ve just gotten really good at being very steady and holding my breath while I take the photo.” She uses two cameras rather than one with two lenses. With the aircraft door open, she says, “Switching lenses up there would be a bad idea. You don’t want anything loose in the plane.” Even within her strict safety envelope, she strives for perfection. “We’ll make maybe five passes to get the perfect lined-up shot—one pass to eyeball it and then either adjust my plane differently or the subject plane differently, then keep fine-tuning it until I get the plane exactly lined up how I want it.”

Never does she defy conditions. “At the last minute we check the forecast,” she says. “If we know it’s going to be 50/50, everything is off,” though the decision might cost thousands of dollars. In one month this year, all seven scheduled photo sessions were postponed. “Somebody told me I sounded like a farmer whose business is dependent on the weather,” she says. It’s not always a matter of safety but sometimes image quality: They can fly in cloudy skies, but that doesn’t result in dramatic photos.

Clouds, though, can lead to golden moments. San Francisco Bay is one of Ambats’ favorite landscapes, except when the fog fully envelopes the bay: then, she says, “You could be flying anywhere.” On one shoot, she photographed two jets flying in tandem over a blanket of fog shrouding everything except one of the Golden Gate Bridge towers. “That’s an example of being very lucky,” she says. It’s also an example of impeccable skill: The two jets are framed perfectly in the bridge’s suspension cables.

Jessica Ambats doesn’t leave anything to chance. Luck is not on her checklist.

Eric Minton is a writer and editor in Washington, D.C

A Change in the Atmosphere

Jessica Ambats had long dreamed of publishing her air-to-air photography in a book, and the COVID-19 pandemic offered her the opportunity to finally produce “Jet Dreams” earlier this year.

With every one of her scheduled photo sessions postponed due to COVID-19 restrictions, Ambats filled her time self-publishing the 216-page hardcover book, which includes a foreword by world champion aerobatic aviator Sean D. Tucker.

“It’s a challenging project to self-publish a book,” she says. She used Kickstarter to launch the venture, and the campaign pitch sums up her photographic pursuits as well as her own passion for aviation: “The owners of these jets are their own pilots. They are entrepreneurs of all kinds—inventors, creatives, techies, and more—who learned to fly. Each time they rotate off the runway, the little kid inside them cheers, ‘Yes!’ This book is about that kid.”

Meanwhile, Ambats also focused on another challenge: resuming air-to-air photo sessions. “It took about a year to figure out a way to make everything Covid-safe,” she says, including using Zoom for preflight briefs. She gathers her teams of aviators from across the country, and with Zoom, she says, “We do the first briefing a few days ahead of the shoot. Everybody is focused for that hour and gets into the mindset for the shoot a few days before.” 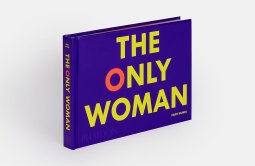 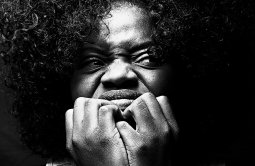