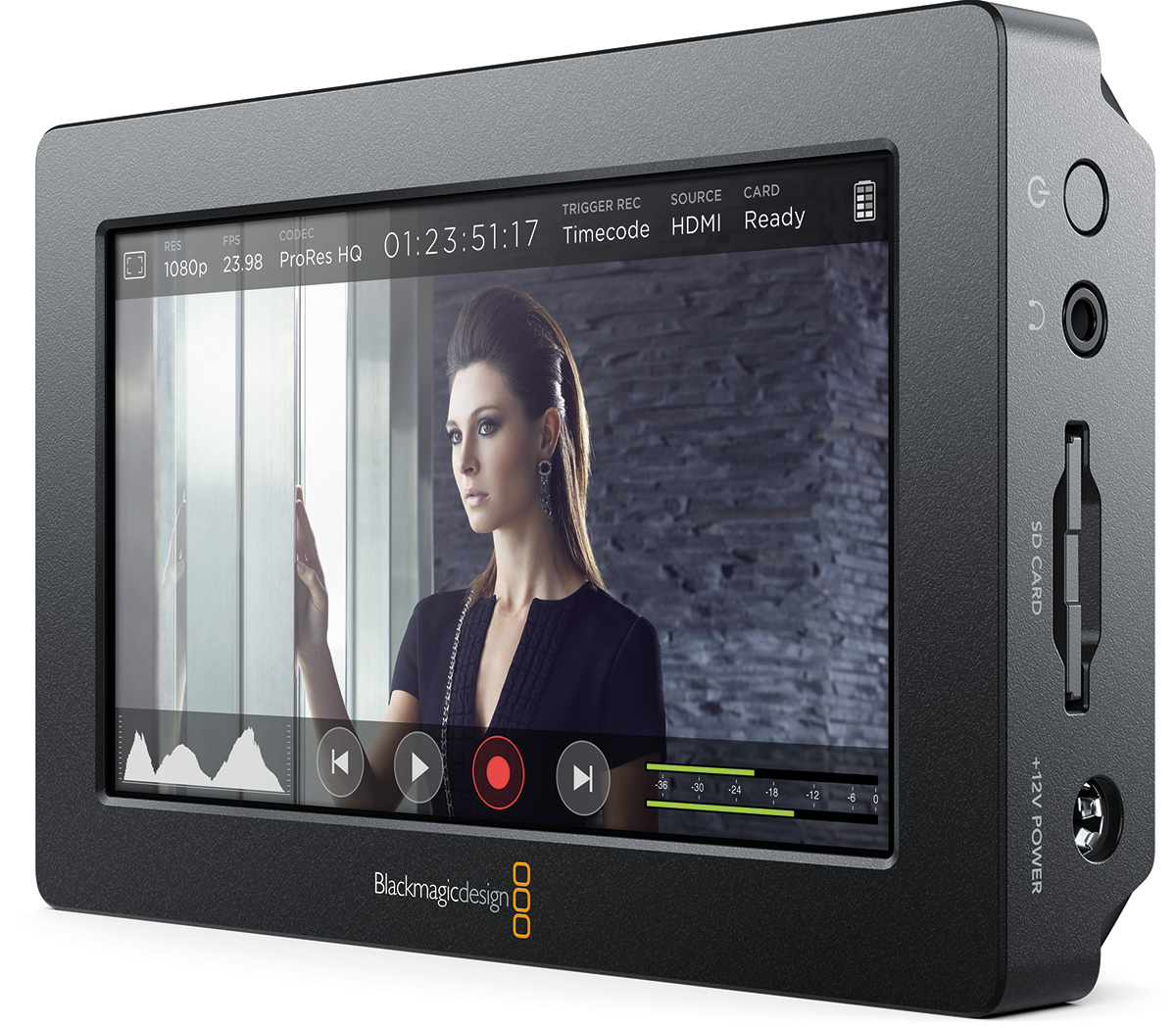 Ever since the DSLR first started making waves as a serious, high-definition video capture device, there have been a number of sacrifices made for video capture on DSLRs and mirrorless interchangeable-lens (MIL) cameras. Some of those sacrifices include lower quality video compression, lower quality color sampling and bit depth, no peaking or zebra stripes (explained later), and file conversion needed for editing. These sacrifices were made primarily because the cameras were never originally designed for video usage, so common video features weren’t added (though some have now been added in some cameras), and quality had to be compromised so that HD video footage would fit on CF and SD cards.

To address these issues, photographers need an additional piece of equipment—the digital video recorder (DVR). As one might expect, there are a number of DVR devices on the market, with Atomos being one of the most popular manufacturers.

These recorders provide photographers with the quality and feature set you traditionally get on the higher end video and cinema cameras (e.g. Canon EOS C100 and C300 or Sony NEX-FS700):

Blackmagic Design (makers of DaVinci Resolve color grading software, as well as a suite of digital cinema cameras) has entered the DVR market with their Video Assist DVR and monitor. Based on its price and ease of use, this will undoubtedly be a strong competitor. 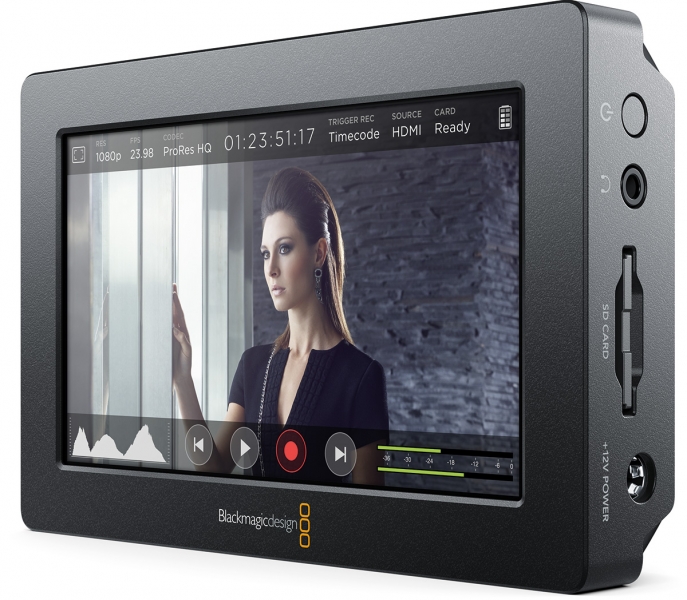 I want to address three specific reasons why photographers should consider using a DVR in the first place and why they should consider Blackmagic’s Video Assist: codecs, color sampling, and cards.

Codec stands for “compression-decompression” and it refers to the algorithms used to compress video and audio to fit onto your CompactFlash or SD cards. Many, if not most, DSLR and MIL cameras use an MPEG codec (commonly MP4) wrapped in a .mov, .mp4, or an AVCHD format. (As a quick reminder, the format is the “wrapper,” or the container for the video and audio. Any number of codecs could be wrapped in any number of formats. For instance, your .mov files could be MPEG4 .mov files, H.264 .mov files, or ProRes .mov files. Other common formats include the aforementioned AVCHD, XAVC, and WMV.)

The Blackmagic Video Assist DVR records in Apple’s ProRes codec, and in the four most popular “flavors”: ProRes HQ (approx 220 Mbps), ProRes 422 (approx 145 Mbps), ProResLT (approx. 100 Mbps) and ProRes Proxy (approx. 45 Mbps). Mbps is Megabits per second and represents the quality of compression. The higher the number, the better the quality (and subsequently, the larger the file sizes). This should not be confused with MBps (capital B) which is typically Megabytes per second (there are 8 megabits in a megabyte). Megabytes are commonly used to describe file sizes (e.g. that video file is 50MB).

The Video Assist also records in DNxHD (digital non-linear extensible high definition), another common codec used primarily with Avid editing software. The overwhelming majority of you will use ProRes.

There are two key reasons ProRes is superior to the internal codec most likely used by your DSLR or MIL camera. First, if needed, it’s a higher quality. Admittedly, many of the current mirrorless cameras like the Panasonic GH4 or Sony Alpha a7S II can record up to 200 Mbps and 100 Mpbs, respectively. However, the second key reason ProRes is a prefered codec is that you can start editing ProRes footage immediately, with no need to transcode. Even if your NLE can natively edit MPEG4 footage, often editing this kind of footage is more taxing on your system. Also, in the case of the aforementioned mirrorless cameras, they each use AVCHD or XAVC wrappers, which typically require some kind of additional software or plugin. Furthermore, AVCHD and XAVC wrappers are usually contained within a library file (often named “private”), making it more complicated to access select clips. For example, if you were to shoot two different jobs on the same card, forgetting to format the card between jobs, the clips from job #1 would be in the Private file with the clips from job #2. Therefore, when copying the footage from job #2 to your drive, you’d also have to copy over the footage from job #1 (again), then have to deal with deleting it.

When your video clips are all nicely separated, in a high quality, commonly used format that your NLE finds easier to manage, life is just better.

This is where it can get complicated and confusing. Going into details about color sampling is beyond the scope of this article. You may have seen these numbers and be familiar with them: 4:4:4, 4:2:2 and 4:2:0. Let’s just say the first number represents luminance and the second and third numbers represent color information (i.e. chrominance). The 4:4:4 standard means every pixel has all its own luminance and chrominance information. The other two sampling sets mean that groups of pixels have to share color information.

You will typically only find 4:4:4 video in the highest end cinema cameras (e.g. RED Epic and Arri Alexa). Most DSLRs shoot in 4:2:0. This is an okay color sampling that will meet a majority of your needs with no visible quality difference to the average viewer (especially if you’re further compressing a video for the web). Where 4:2:0 sampling becomes a problem is if you plan to do a lot of color grading or chroma keying (i.e. shooting on a green screen to replace it with a superimposed image).

With 4:2:2 color sampling you get about half the color information of 4:4:4, but that will be more than enough if you want to increase your color grading or chroma key quality. Furthermore, the Video Assist records in 10-bit (vs. 8-bit, which is what most DSLRs record internally; even the Canon EOS C100 digital cinema camera only records 8-bit).

Last but not least, perhaps the tie breaker when it comes to possibly choosing Blackmagic’s Video Assist over a competitor is the fact that it records to SD cards. That is huge. Most DVRs record to SSD (solid state drive) cards which are usually more costly and typically more of a pain to offload data.

Furthermore, if you’re a still photographer (particularly if you’re using a mirrorless camera), you likely already have SD cards. So there’s no need to buy additional cards. (Backmagic recommends cards that are UHS-1.) 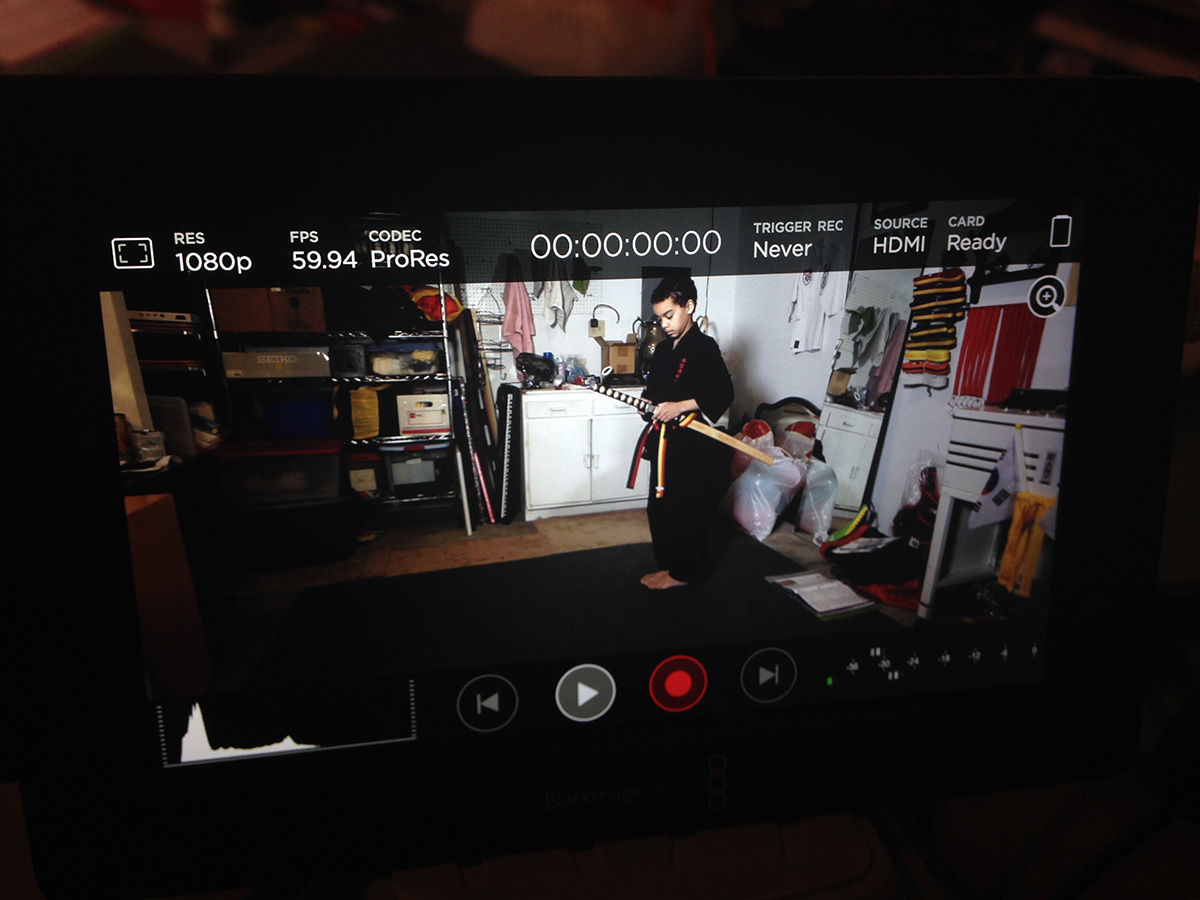 There are a few other key features of the Video Assist worth noting: 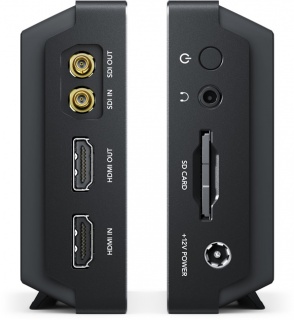 When I tested the Video Assist, I used my wife’s Sony Alpha 6000 recording at 24 frames per second at 1080p. However, I noticed that the fps reading on the Video Assist was at 59.94 (aka 60p). At first I thought this was perhaps a bug in my loan unit. But I did some research online and discovered it’s an issue with Sony cameras. The HDMI signal from the Sony for some reason is 59.94. I was not able to alleviate this problem on the Alpha 6000. However, if you are a Sony user, chances are you’re using the a7S or a7R. The popular video review site CheesyCam has a YouTube video that demonstrates this issue (video at http://j.mp/cheesy-sony-test). The solution is to set your camera recording to 1080p 24 fps and your HDMI output to 1080p at 24 fps. If you try to record at 4K 24fps, even if your HDMI output setting is 1080p and 24fps, the Video Assist will record at 59.94. (I couldn't confirm this with the Sony Alpha 6000 because there's no way to change the HDMI output frame rate). CheesyCam tested the Video Assist with the Panasonic GH4 and found that whether or not shooting at 4K or 1080p, if the HDMI output is 24 fps, the Video Assist will record at 1080p and 24fps.

One other issue I encountered was that I couldn't change the date/time or the card name in the Setup menu. I’d make the changes and hit Save, but the settings didn’t change. I believe this may be a bug just in the unit I had, but it’s worth making a note.

In the end, Blackmagic’s Video Assist is a great value. At $495 it is competitively priced. The quality is very good with the ability to record 10-bit ProRes 422 video. The use of SD cards gives it an edge over competing devices if you’d rather not have to deal with a whole new type of media. If you’re a Sony user, you may want to wait until a firmware upgrade that addresses the HDMI output issue (either on Sony’s end or Blackmagic’s).