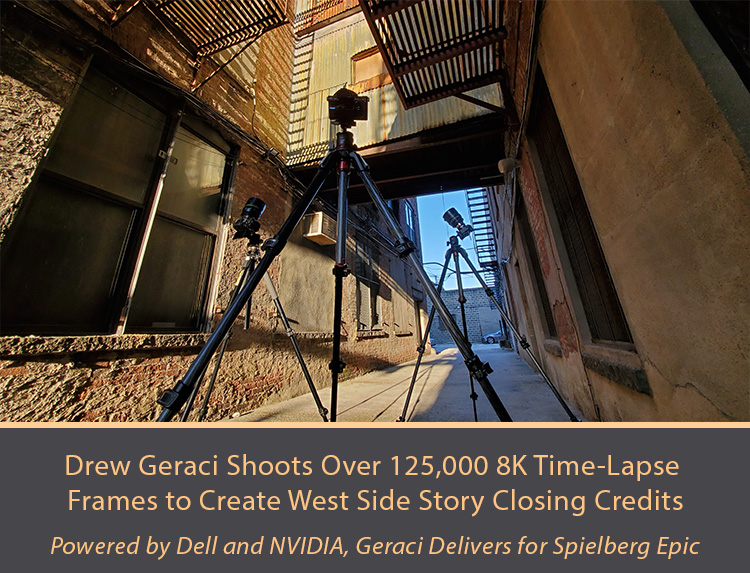 An award-winning photographer and cinematographer, Drew Geraci has worked in TV, film and advertising for over 20 years. Following nearly a decade of service in the U.S. Navy as a mass communication specialist, Geraci signed on as a senior multimedia producer for the Washington Times in Washington, D.C. His passion for visual storytelling led him to found District 7 Media, specializing in brilliantly colored and high-impact HDR motion-controlled, time-lapse, aerial and high-speed content.

Geraci rose to prominence after landing a job working with David Fincher to film the now-iconic House of Cards opening title credits, and he has gone on to work with other high-profile directors including Alejandro Iñárritu. His work has been featured in projects for the NFL, HBO, Netflix, Red Bull, Sony, Apple, Disney, Showtime, Dell, Cartier and more.

Recently, Geraci was taking a breather between projects when he received an unexpected call to shoot some timelapses for an unnamed feature project. That led to his yearlong involvement with Steven Spielberg's West Side Story, which received seven Oscar nominations. Geraci's time-lapse imagery was used to build the movie's closing credits, which beautifully illustrate the haunting, shadowed final moments of the film.

We reached out to Geraci to talk about his involvement in the film, his workflow and the gear he used. He was kind enough to tell us the story in his own words… Drew Geraci: This is definitely one of the craziest things ever to happen to me, but my involvement with West Side Story started with me on my couch watching a movie on a Monday night. Just a normal evening back in September of 2019, nothing special happening, when my phone rang around 10 p.m. On the other end was someone asking if I'd be available the next morning to shoot a few timelapses for a feature film.

They didn't give me any details, only that it was imperative that I make it to set by 6 a.m. to meet with the director and figure out if I could lend my talents to his vision. I was told this was a big-deal director, and I shouldn't skip this opportunity. So I told him, "Sure, why not? Let's do it."

The film was being shot in New Jersey, which was only a three- or four-hour drive up from Virginia. I loaded up my Jeep, threw five Sony a7R IIIs in my bag, took a bunch of tripods, my Dell laptop, and four- or five-days' worth of clothing because I didn't know how long the shoot would actually last.

When I arrived on set, I met up with the executive producer who had called me the night before, and he proceeded to introduce me to the director. It was Steven Spielberg. I instantly recognized his face and his voice. We started to chat, and I handed him my laptop to show him some of my work. He immediately said, "Let's get you shooting." I wasn't given any direction other than to capture beautiful sweeping shots of light and shadow as it crept up and over the set pieces, which were beautifully modeled after brownstones from the 1950s.

The Initial Shoot
I was originally told this was just to test the light, but it ultimately turned into something much, much bigger. I started shooting that day after speaking with Spielberg and after the cast and crew vacated the set. It was just me, my a7R IIIs, and four or five PAs to help direct traffic and keep the scenes clear. We started at 10 a.m. and wrapped around 9 p.m., as the final light of the sun danced along the rooftops of the set pieces. I was eager to get back to my hotel room to process my shots, since they would ultimately dictate if I would shoot more for the production or not. Back in 2019, it wasn't really easy to process 8K resolution photos in a timely manner, but I had my Dell XPS 15 at the time, and it surprisingly handled playback fairly well. The first few moments of seeing those images come to life on my laptop screen made me grin. The shots looked beautiful. Shadows swept up and over the buildings like a blanket covering a newborn child. I couldn't stop smiling.

I immediately rendered out the shots in 4K and sent them to the art director, who then forwarded them to Spielberg. It wasn't until the next morning around 5 a.m. that I got an email back saying, "They look great. Steven would like you to shoot a few more."

I spent the next six days shooting every possible angle of the set in glorious 8K, capturing all the beautiful textures, details and light the days could offer. It was grueling. I started at 5 a.m. and finished at 8 p.m. or 9 p.m. every day, since capturing shadow shots takes the entire duration of a day to complete. At the end of the shoot, I delivered around 20+ different timelapses and honestly thought that was the end. But it wasn't.

But Wait, There's More
Flash forward five or six months, and I get another call from the unit production manager saying, "Hey Drew, you probably didn't think you'd be hearing back from us, but Steven would like more time-lapse shots of shadows. He wants them for the title/credit sequence." I immediately knew my time and effort to create the original shots paid off, and I headed back north a few weeks later, this time to New York City.

It was February 2020, and COVID hadn't become a pandemic yet, so I piled into a van with the art director, location manager and a few PAs. We drove around the city and the surrounding area to capture as much shadow-play on 1950s architecture as we could find. We spent the entire day, from dawn to sunset, capturing shots — around 70+ over a three-week period.

In all, I ended up shooting over 125,000 individual time-lapse frames for the production, nearly 20TBs worth of content, which was an incredibly time-consuming to process, but I always love a good challenge! The Gear That Powered Me Through
I decided to use the Sony a7R III because it was the highest resolution camera available at the time. The production also wanted to match it to the Alexa 65, and the R III had the best resolution to match that, as well as the dynamic range. I paired each camera with an assortment of Sony lenses, including the 16-35mm, 24-70 mm and 70-200mm. I also used a few cinema-grade lenses — as requested by production, the Tokina Vista 8K series (18mm, 25mm and 35mm) — and they worked well side by side with the Sonys.

I was now using two different workstations: a custom unit and a Dell Precision 7920 with a 24-Core Xeon processor, 192GB of RAM, and an NVIDIA Quadro P5000 GPU with 16GB. I ended up processing all the material on the Dell Precision because the 8K frames needed at least 16GB of VRAM to export, and at the time that machine was top of the line and handled the 8K editing with relative ease. I was able to queue up all 70+ shots inside of DaVinci Resolve and color-grade, edit and deliver everything much faster than I could if I was using my custom-built machine.

The Dell Precision 7920 was able to take the brunt of the processing work, which really helped to get the content out the door in a timely fashion. It took nearly two weeks to process all 125,000 frames, and after they were completed, the shots were shipped off to The Mill, where they began assembling the title/credit sequence for the production. If I had used my other machine, it likely would have taken three to four weeks to produce, which is why I especially enjoyed using the Precision 7920 for this production.

In The End…
When we were finished, the material looked stunning, and Spielberg himself said he loved what he saw. He actually started editing them together as we delivered them to him over the course of the project. It's a surreal feeling to hear that a director you've looked up to since you were a kid is editing and using your work for his production. It was truly an honor to be involved with Spielberg's West Side Story.

And now, I've just finished work on two other exciting projects, which, of course, I'm not allowed to talk about yet. And I'm about to move on to the latest Dell Precision 7770 mobile workstation with an NVIDIA RTX A5500 laptop GPU. I can't wait to see what the future holds, as new technology continues to propel the art of visual storytelling forward.