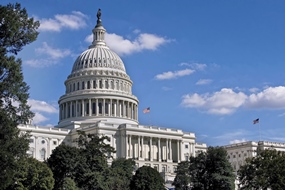 The House Judiciary Committee held a hearing about copyright and the CASE Act on September 27th at 2:00 pm EST. PPA’s own CEO, David Trust, was selected as a witness to testify on behalf of the act, HR 3945.

It was an exciting and thought-provoking proceeding, with compelling testimony presented about the current state of copyright inequity for small creators. Dozens of blue-shirt wearing members of the creative arts community and professional photographers from PPA sat behind David, photographer and small-business owner Jenna Close, and the Copyright Alliance's Keith Kupferschmid as they spoke out on behalf of creator's rights. We are so proud of our PPA Advocacy Team and all of their hard work preparing for this event and we are thankful for all the committee members and co-sponsors who showed their support. But most of all we are excited and encouraged that the testimony presented today will make a difference in the continuing process of creating equal protection under copyright law for small creators.

Check out photos from the hearing below, as well as video and the written testimony. And of course, we will keep you updated as soon as we hear about further movement on HR 3945.

"As many of you know, H.R. 3945- CASE act had a hearing on September 27th in the House Judiciary Committee. The main purpose of this hearing was to have associations and companies that opposed the bill or had concerns about this bill have their concerns discussed, and officially put on the record. This also gave supporters of the bill the opportunity to address their concerns and once again highlight why this bill would be so impactful to photographers and small creators alike.

The hearing yesterday went extremely well. Attorneys from both the Computer Communications Industry Association (CCIA) and Internet Association (IA) were able to share their concerns, but the members of Congress explained why those concerns were not a big deal at all.

Considering how much was going on on Capitol Hill during this time, we had a great turn out of Judiciary Members. A special thank you to Chairman Goodlatte, Ranking Member Nadler, original bill-sponsors Hakeem Jeffries, and Tom Marino, and last but not least Georgia’s own Doug Collins and Hank Johnson.

Now that we had a successful hearing the next step is to move towards a markup. This is when the House Judiciary Committee will once again take a hard look at the bill and see if any changes need to be made in accordance with present law, see if there is any way to improve the bill, and once again address any concerns that may arise. Since the House is adjourning this week and with elections right around the corner we are not sure when this will happen, but we will continue to push for a markup by the end of the year.

Stay tuned for more updates, and Calls to Action. We couldn’t do this without you!"

Click Here to read a great op-ed from The Hill by the president of SAG-AFTRA, Gabrielle Carteris, on the importance of the CASE Act!

Today is the day! PPA, the Copyright Alliance, and ASMP's photographer Jenna Close are all doing some last minute prep for today's testimony in front of the House Judiciary Committee. They're practicing their responses to questions, timing their testimonies, and anticipating what will happen during the hearing.

We all feel confident about this hearing and are ready to go! We are hoping that we will have most of the committee attend.

Don’t forget to tune in at 2:00pm! PPA.com/Hearing

We have had two meetings so far and they have been great! We started the day with Congresswoman Jayapal’s (D-WA) office. During this meeting we had the opportunity to talk about the Congresswomen attending the hearing and if they had received the more updated changes to the bill. It was also a good time to touch base and discuss any concerns they have. This office has always been a great supporter and we are excited to continue working with Congresswoman Jayapal’s office in the future.

After leaving Jayapal’s office we had met with Congressman Jordan’s (R-OH) office. This was a very quick meeting since there is so much going on on Capitol Hill. This meeting was to confirm the attendance of Congressman Jordan at the Small Claims hearing tomorrow. Also, we took time to highlight some of the changes we have made to the bill and provided them with any updates they may have missed.

We are heading to Congressman Chabot’s (R-OH) office and this will be our final Representative Meeting of the day. After leaving this meeting the group will get together and finish up some last-minute prep for the testimony and make sure everything is ready to go for tomorrow.

PPA is extremely excited to have this opportunity to testify! Don’t forget to tune in tomorrow at 2:00 pm ET to watch David Trust, PPA’s CEO, testify about why Small Claims is so important! PPA.com/Hearing

Your PPA Advocacy Team is at the airport, getting ready to head to DC for a very exciting trip! By now we hope you have heard the big news...But just in case if you haven’t…PPA has been invited to testify in front of the House Judiciary Committee on September 27th at 2:00 pm ET. This is a big deal for multiple reasons! First, having a hearing will allow the House Judiciary Committee to hear, address, and ask questions about any concerns they may have. This will also be the first time we are able to address the concerns of our opponents directly and hopefully get direct answers as to why they may oppose the bill.

The even bigger news is that PPA was invited to testify. This in itself is a huge deal. Many associations, companies, and individuals are constantly attempting to get in front of Congress and its various committees. The fact that PPA’s own CEO David Trust was approached directly by the committee says a lot. And, let’s be real, this could only happen thanks to you guys! But remember, our work is far from over! With the Congressional session winding down, elections coming up, and Congress being busier than ever, we need to make sure its focus remains on Copyright.

We have a great line up of meetings today, and will make sure we have plenty of time to get ready for the hearing tomorrow as well! Stay tuned for more updates and don’t forget to tune in tomorrow at 2:00 pm ET at ppa.com/hearing.

In October of 2017, Representative Hakeem Jeffries introduced H.R. 3945- the Copyright Small Claims Bill or CASE. Soon after, 14 members of the House of Representative signed on as co-sponsors.

Over the next year, PPA and our coalition of other organizations held numerous meetings with key members of the House Judiciary Committee. Finally, in April of 2018, it looked like the CASE act would come to the House Judiciary for a markup, where the bill would be discussed and amendments made to ensure it can easily pass the House, addressing any concerns parties may have.

Unfortunately, at the very last minute, the House Judiciary received word of some opposition from key players in the technology industry. This opposition prevented the CASE Act from having a markup and started strategical meetings to address concerns.

After almost five months of meetings and discussions, the House Judiciary Committee has agreed to have a hearing on the CASE Act! A hearing is when proponents and opponents of the bill are summoned by Congress to testify before them. During this testimony, witnesses are able to share why they support or oppose a bill and address any questions that members of the House Judiciary may have. This helps educate, clears any confusion, and demonstrates if the concerns regarding the bill are valid.

This hearing will occur on September 27th at 2:00 pm EST. PPA's own CEO, David Trust, has been selected as a witness to testify for the CASE Act. It is an honor for PPA to be chosen - every organization vies to be selected for this type of hearing. We didn't even ask...the Committee just decided from the beginning that PPA should be a witness. This is something all PPA members should be very proud of!

You can watch this hearing live at PPA.com/Hearing.