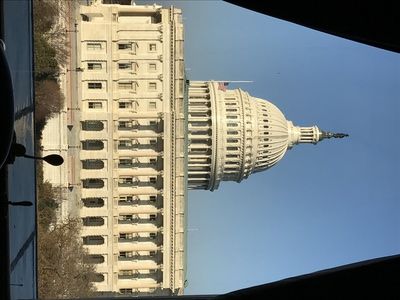 We just finished Day 2 on Capitol Hill and must say that it was another great day!

After talking with Representative Collins, we then moved on to meet with Representative Chabot's office (Ohio-D). We had the opportunity to meet with this office in the past and thought it would be a good time to circle back and go into more details why small claims is necessary. Like at our previous meetings, Representative Chabot's office was receptive to the idea of small claims and understands why there is a need for such a process. We also helped answer any questions the office may have had, and we hope that Rep. Chabot will join in as a co-sponsor.

Once we left Representative Chabot's office we met with Representative Jordan's office of Ohio (R). This was one of our first meetings with this office. During this meeting, we took the time to lay the foundation for small claims and why it so necessary now more than ever before. During this meeting, we were fortunate enough to have members of the Visual Associations join us and share their insight and stories on why small claims is so important.

Moving on from Representative Jordan's office we met with Representative Frank's Office (R-AZ). This was our first-time meeting with this office as well. Initially we were supposed to meet with the Representative himself. However, due to the last-minute changes and the need to be on the House floor, we met with a staffer instead. We provided a good summary of the CASE act and explained where the bill currently stands. Since this was our first time meeting with this office we wanted to provide them with all the necessary information and give them time to think about whether small claims would be something they could support.

Finally, we ended our day with Representative Cohen (TN-R).  This meeting was fairly short as well since we met with this office last month and wanted to take a quick minute to provide the office with any updates we could. We are hoping that constantly being updated will encourage Representative Cohen to sign on as a co-sponsor.

Like I said, we are done for the day but we will be right back at it on tomorrow. In the meantime, don't forget to send your rep a call or later at PPA.Com/smallclaims.

We are off to the races this morning! We are going to start the day with Georgia's Representative Doug Collins. Rep Collins has agreed to do a Facebook live with us to talk about the CASE act and why it is so important. He will also outline what you need to do to make sure the act gets passed!

After that, we are going to rush off to meet with Rep. Chabot of Ohio (R). We have met with him before but wanted to take a quick moment to touch base with him again and show him how many small creators will be positively impacted by this bill. During this meeting, we will also have members of the Visual Association joining us. Remember there is power in numbers!

Once we leave Chabot's office we are going to another Ohio office. This time it will be Rep.  Jordan  (R). We are going to bring Rep. Jordan's office up to speed on what has been happening with the CASE act and answer any questions that he may have. We are hoping that Rep. Jordan will understand why the CASE act is so important and eventually sign on as a co-sponsor.

After Rep Jordan's office, we will be moving on to Rep. Franks' office of Arizona (R). We have met with this office in the past but want to circle back and see if they had any questions and give them a few updates.

After meeting with Rep. Jordan our next stop will be Rep Deutch's office of Florida (R). This is an office we have met with multiple times! We are hoping that we can bring them up to speed as well and convince them to sign on as co-sponsors.

Last but not least we end the day with Rep. Cohen of TN (D). We are hoping Rep. Cohen understands the needs of small creators since Memphis and Nashville are in his state. We have not met with this office recently, but thought it would be a good time to do so!

I am running to Collins' office now, but as always do not forget to send your letters! We need Congress to hear from us on why the CASE act is so important!