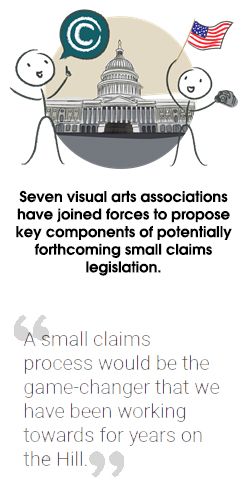 ATLANTA, GA (March 02, 2016) - While there has been a great deal of discussion recently about the possibility of Congress creating a small claims process for visual arts, several visual artist groups, representing hundreds of thousands of creators, have joined forces to propose key components of potentially forthcoming small claims legislation. Collectively, the groups represent photographers, photojournalists, videographers, illustrators, graphic designers, artists, and other visual artists as well as their licensing representatives.

“The current review of copyright law in the House Judiciary Committee creates an opportunity to repair a decades-long inequity of our nation’s copyright system,” said David Trust, CEO of Professional Photographer of America. “A small claims process would be the game-changer that we have been working towards for years on the Hill.”

These organizations have identified the creation of a small claims option to be their most urgent legislative priority before Congress. They assert that the cost and burden of maintaining a lawsuit in the only existing venue for hearing copyright infringement claims—federal district courts—is prohibitive and all too often leaves visual artists no way to vindicate their rights. They see a small claims process within the Copyright Office as providing a fair, cost-effective and streamlined venue in which they can seek relief for relatively modest copyright infringement claims.

Trust continued, “The harsh reality is that the vast majority of creators in America are currently excluded from copyright protection. This would finally level the playing field for small creators. Now we get to begin the difficult task of selling this idea to Congress.”

This negotiated document, which lays out the basic framework for small claims legislation, is in large part consistent with the legislative recommendations set out in the “Copyright Small Claims” report released in late 2013 by the U.S. Copyright Office. In some instances, the white paper offers alternative suggestions to those put forth by the Copyright Office.

The visual artists’ organizations listed above have now distributed this legislative proposal for a copyright small claims tribunal to members of Congress, the United States Copyright Office, the members of the undersigned organizations, and other important copyright stakeholders.

For more information, please contact Professional Photographers of America at 800-786-6277 or CopyrightDefense(at)PPA(dot)com.