Build Your Business with the PPA Business Challenge! 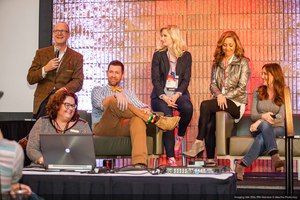 PPA's Business Challenge was born nearly one year ago, at Imaging USA 2016 in Atlanta. It was during the Studio Makeover class, dedicated to unveiling the results two studio owners had by implementing PPA's business advice, when Education Director Angela Kurkian began to realize the program could be scaled up. By adding the Challenge as a group on theLoop, all PPA members would have the chance to join and begin their 12-month, step-by-step program to profitability and sustainability for their photography businesses.

It's been a huge success. There are now nine different Challenge Groups on theLoop, with over 900 members taking advice, implementing changes, sharing wisdom and holding each other accountable as they make the steps toward their studios becoming more financially sound!

Two new announcements have been made in preparation for the program's anniversary: 1) a class at Imaging USA 2017, and 2) a new join-schedule for upcoming Challenge Groups.

First, instead of offering the challenge each and every month, the groups will be starting during the months of February, March, April, May, August, September, October and November. This means there won't be any new groups forming in December, January, June or July. This will allow more time to dig even deeper in the groups that are currently running and no one has to worry about signing up during the holidays or summer vacation!

The class will be held on January 8 and  asks the question,  "iI you could make four changes to your business and your way of thinking that would help you be more profitable, add time to your day and move your life in the direction you dream of, would you do it?"  Full of great takeaways and business strategies you can start implementing right away, this class is the perfect introduction to the Business Challenge program, which can help you build your business on a strong foundation in 2017.

If you're not already using the Business Challenge to own your place in the photography industry and be more profitable, what are you waiting for?! Sign up now at PPA.com/Challenge!